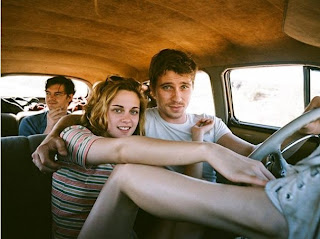 Pardon the clunky title of this post, but I am being sensitive to how Google searches blog posts as well as how readers decide which Google results to read. I am going to take a different tack for this review, in part because On the Road has been reviewed extensively by the American media and there's little left to say except whether one agrees or disagrees in part or in total with a particular review. If you want to read an exhaustive treatise by acclaimed Kerouac biographer Gerald Nicosia, click here. Gerry also talks about the film in this recent interview with Pacific Sun.

But I digress. Here's my plan for this post. First (Part 1), I will opine about my reactions to the movie very briefly. Then (Part 2), in order to take a unique tack, I will outline the entries in my book, The Beat Handbook (available here), that make an appearance in the film.

Overall, I would give the film a B+ (using the traditional school grading scale of A, B, C, D, F). Given that On the Road has long been deemed "unfilmable," it's a good adaptation. I think it probably works better for Kerouac fans because we can fill in the holes which inevitably are left when adapting a 300-page novel to a 2-hour screenplay. I do wonder if I'd never heard of Jack Kerouac whether I'd grade the film the same way. I doubt it.

I've opined about the casting before, but I can't ignore it. I can understand why Salles chose star-power as he did, but I think he could have done better. The worst casting was Kristen Stewart as Marylou. That's not how I see Marylou at all, but I will give KStew kudos for breaking out - a little - from her typically flat performances. Sam Riley as Kerouac? I thought he was only okay. I can't wait to see Jack Huston as Kerouac in the upcoming Kill Your Darlings - that guy can brood. I bought into Tom Sturridge as Ginsberg, and Viggo Mortenson captured Burroughs effectively enough (although he didn't get enough screen time). The women in the film were about as fleshed out as Kerouac treated them. They all did well, especially Kirsten Dunst (who I've decided is actually the same actress as Julia Stiles - I can never tell them apart) as Camille. Steve Buscemi is always excellent, although I could have done without the graphic sex scene with Hedlund. Which brings me to Garrett. After three viewings now (only one of the U.S. version), I am a fan of his portrayal of Dean. I think he could have been more kinetic (the actor who played Neal in The Beat Generation performed at the Merrimack Repertory Theater in Lowell last October was perfect in the part), and I wish the screenwriters had given him more of Dean's spontaneous dialogue with the "yasses" and "ah-hems" and "yups", etc.

So, the acting was solid but not overwhelming. Not so the cinematography. It was excellent, and I'm glad I went to see it on the big screen. Eric Gautier definitely hit a bulls-eye, and the careful location selections made me really believe I was watching America in the late 40s.

I think the U.S. version was better scripted than the Cannes version because it better emphasized the relationship between Sal and Dean as well as the search for their fathers. Note I say "their" because Sal was searching for his father figuratively alongside Dean's literal search. They did leave out some material I would have liked to have seen, such as Sal's time living with Remi in California. Can't you just picture some of the scenes with Sal as a barracks guard, as well as their lunch on the old rusty freighter? I also wanted to see the scene where Kerouac gets sidetracked near Bear Mountain, NY, at the beginning of his first trip west. And how could Salles have omitted the Ghost of the Susquehanna? I admit I'm biased, having lived and worked in the Harrisburg, PA, area, but this is a seminal scene!

What they did include was necessary - I can't think of any throwaway scenes. I was especially glad they included "pisscall," as that is - for me - the funniest scene in the book. And, of course, "the mad ones" made it in, as well as the closing of the novel ("I think of Dean Moriarty").

I think a grade of B+ is pretty damn good given the well-acknowledged difficulty of bringing On the Road to the big screen. I'd only give the Cannes version a B, so Salles did well in his editing (with extensive input from Gerry Nicosia).

Since the 78 On the Road entries in my book aligned with specific passages in the novel, and since I chose those passages because I thought they were important, I thought it would be interesting (for me, at least, and hopefully for some of you) to see which passages made the cut. That is, where did Salles and I agree on whether to include a passage. I used bold font to indicate the included passages.

Are you bored yet? Think how tedious this was for me!

You're halfway there. Press on!

Ten days to go. If you got this far, you'll make it to the end!


By my count, that's 20 out of a possible 78 entries from my book that show up in the film. That's about 26%, or, in baseball terms (since we're talking about Kerouac) a .256. Most batters wouldn't mind that as a batting average, so I'm not displeased.

Now that you got this far, I thought it only appropriate to give you one more chance to buy my book on Amazon just in case this exercise made you curious. Click here for the ordering page.

In summary, I recommend you see this film, but definitely see it on the big screen since the cinematography is the film's strong suit.

Finally, the anticipation for On the Road is over. Now on to Big Sur and Kill Your Darlings.


Posted by Rick Dale, author of The Beat Handbook at 11:25 AM

I hated he actors choose to the film... Kristen Stewar = Marylou? urrrgg, Marylou has much more personality!!!