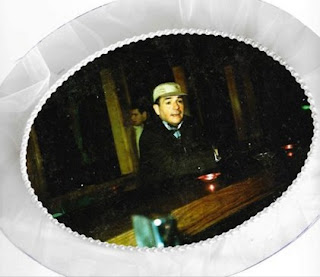 This photo, which recently appeared in the Jack Kerouac Facebook group courtesy of friend and Kerouac scholar Kurt Phaneuf, had not been previously seen by many members of the group, myself included. The only info I have about it is that it was taken at Nicky's in Lowell (now Ricardo's) -- where Jack used to hang out because it belonged to his in-laws and they looked out for/tolerated him -- around 1967.

By the way, if you are not yet a member of the Jack Kerouac Facebook group, I recommend asking to join (it's a closed group). Just go here and click Join. It features lots of scholarly as well as fan-based posts, and a treasure trove of archived photos and documents. The group is managed by several administrators who are well-versed in all things Kerouac, including Dave Moore from the U,K., a noted Kerouac scholar.
Posted by Rick Dale, author of The Beat Handbook at 10:09 AM