Curation #11 from my Kerouac bookshelf -- William S. Burroughs: A Man Within (DVD) 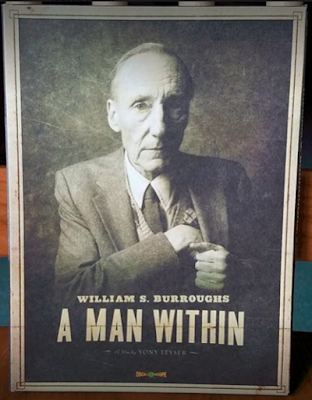 Item #11 in my Kerouac bookshelf curation project is a DVD titled, William S. Burroughs: A Man Within. Directed by Yony Leyser, it was released in 2010 and has a run time of 87 minutes. It's available from Amazon (see link below).

I haven't watched this since last spring when I showed it to my Kerouac class at the University of Maine at Farmington. My students usually thought it was worth watching in order to get a perspective on Burroughs (who they read about as Old Bull Lee in On The Road). They were always surprised at the level of influence he had on pop culture, including bands they dug like Sonic Youth. This documentary explores Burroughs' life through never-before-seen archival footage and interviews with colleagues and confidantes such as director John Waters, musician Patti Smith, and many others. It's narrated by actor Peter Weller and the soundtrack is by Patti Smith and Sonic Youth.

If you're a Burroughs fan, you may not learn a lot of new facts from this documentary, but it is well-produced and will likely keep your interest. If you're not, this documentary will provide a number of important insights into this key member of the Beat triumvirate.


Below is a picture of the top shelf of my Kerouac bookshelf showing the placement of my Burroughs DVD (7th item in the pile) on the day I started curating my collection. Next up: Kill Your Darlings, the film.

Posted by Rick Dale, author of The Beat Handbook at 9:36 AM