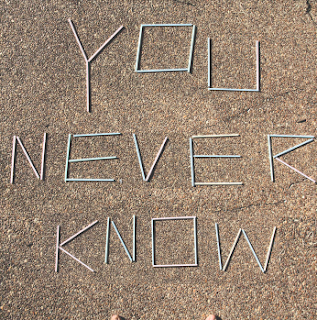 In college, I had a professor who was also the wrestling coach. Wrestling was a big deal at Lock Haven State College (now University), and Coach Ken Cox was well-known for screaming "Shooooot!" from the edge of the mat when he wanted his wrestler to "shoot" in and perform a takedown on his opponent.

Another thing he was well-known for, at least by those of us who had him for classes, was him saying -- frequently -- "Y--y-ou never know."

And you don't. You may think you do, but you are just fooling yourself by holding onto certainty when, in fact, there isn't any. The only thing for certain is we are going to die. Some day, humans -- if there are any -- won't even be able to say the sun will come up in the morning.

To wit, last night we were out and about in our usual Friday night rounds in Hallowell, Maine, taking in some live music, and an acquaintance we hadn't seen in a while came in the bar. In our conversation he mentioned how much he appreciates my Kerouac ramblings on The Daily Beat. I never suspected him to be a regular reader or even a Kerouac fan, but as Coach Cox said, "You never know."

It's gratifying to know that when I go to the trouble of spinning some Kerouac or Kerouac-related yarn here in my blog that at least one person takes the time to read it. Pageviews don't mean someone has read a post, only that they clicked to the page.

Don, you made my night so here's to you for sharing unsolicited and positive feedback in a world too full of people who only point out the worst of things. If you read this and don't already have my Kerouac book, send me an e-mail (thebeathandbook@gmail.com) with your mailing address and I'll send you a signed copy to show my appreciation.


Posted by Rick Dale, author of The Beat Handbook at 9:49 AM