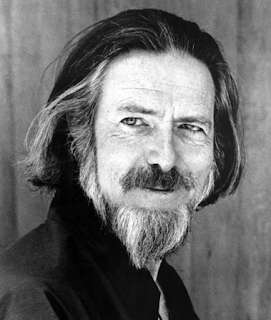 Writer/philosopher and self-professed spiritual entertainer Alan Watts was born on this date -- January 6 -- in 1915. He appeared in two Kerouac novels: as Arthur Whane in The Dharma Bums and as Alex Aums in Desolation Angels.

We have written about Watts on this blog in the past -- click here. I don't have anything additional to say about the man other than that he influenced my thinking about Eastern religion significantly and I recommend his writings and recordings (many available on YouTube). There's even an Alan Watts app for your smartphone or iPhone. When is there going to be a parallel Jack Kerouac app? Kerouac estate, are you listening?

Posted by Rick Dale, author of The Beat Handbook at 12:21 PM