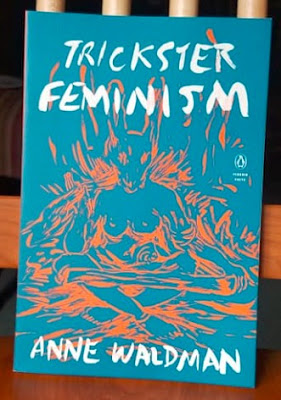 Recently published by Penguin Books, Anne Waldman's Trickster Feminism consists of 17 poems across its 141 pages. The back cover blurb is intriguing:


Mythopoetics, shape-shifting, quantum entanglement, Anthropocene blues litany, and chance operation play inside the field of these intertwined poems, which coalesced out of months of protests with some texts penned in the streets. Anne Waldman looks to the imagination of mercurial possibility, to the spirits of the doorway and of crossroads, and to language that jolts the status quo of how one troubles gender and outwits patriarchy. She summons tarot's Force Arcana, the passion of the suffragettes, and various messengers and heroines of historical, hermetic, and heretical stance, creating and intersectionality of live experience: class, sexuality, race, politics all enter the din. These are experiments of survival.

As I undertook to read this collection, that blurb weighed on my mind. When I have to look up words from the back cover blurb, it causes me to assume that the book's content will be inaccessible to someone of average intelligence such as I. And my concerns weren't unfounded. A dictionary was necessary throughout (to look up words like sciamachy, chthonic, crenellated, and crepuscular); yet, while I did find Waldman's poetry difficult to access, there was a message coming through about speaking to power from a feminist perspective -- in particular, a trickster feminist perspective. That is, a perspective that is unpredictable, cagey, even deceitful when in service to truth and righteous protest. I know that last part doesn't make sense, but it was "first thought" so I'll leave it (as "best thought").

Waldman experiments with forms. There is prose poetry, and what reads as almost a call-and-response chant. If you've heard her perform her poetry, you can hear her fiery voice behind the words. In Marcella Durand's review of the book (click here), she discusses Waldman's use of the descort, wherein each line of a poem is unlike the others. Much of Waldman's work in this book strikes me that way -- almost evoking Kerouac and a stream-of-consciousness approach where one line doesn't obviously connect to the lines before or after it. Durand also mentions Waldman's use of the term dithyramb, which befits her high-soaring and fervent style (it means a passionate or inflated speech, poem, or other writing).

I wasn't sure how to read "strangling me with your lasso of stars." It almost seems like a "cleave poem," wherein the two columns of poetry can be read three ways: down the left column, down the right column, or across both columns and down. I doubt Waldman would lower her sights to such a ham-handed form, but she resonates with the trickster -- so who knows?

Page 91 includes a small-print set of questions (that follow the "cleave poem"), which include "What is the B.I.E. movement?/And who invented it?"/Who were the Silent Sentinels?/What was Gertrude Stein wrong about?" Some of these have clear answers and some do not. And perhaps that is the point. After all, as Waldman states in "melpomene," all binaries are in question.

In these uncertain times, Waldman evokes the trickster in all of us to come forth and help resist that which has been wrought by the powerful in society (and not just "the predator big guy who abuses women" (p. 28). While it takes some work to divine her message, it is one well worth pursuing.

You can buy Trickster Feminism directly from the publisher by clicking here.

Posted by Rick Dale, author of The Beat Handbook at 12:58 PM

Your style is really unique in comparison to other people I've read stuff from.
Thanks for posting when you have the opportunity, Guess I'll just
bookmark this site.

Howdy! I'm at work surfing around your blog from my new apple iphone!
Just wanted to say I love reading your blog and look forward to all
your posts! Carry on the outstanding work!

Wow that was unusual. I just wrote an incredibly long
comment but after I clicked submit my comment didn't appear.
Grrrr... well I'm not writing all that over again. Anyways, just wanted to say wonderful blog!

obviously like your website however you need to test the spelling on quite a few of your posts.
Many of them are rife with spelling issues and I to find it very troublesome to
inform the reality on the other hand I'll surely come again again.

My posts are "rife with spelling issues"? I suspect you are a troll, but if not, have the courtesy to point them out and I will gladly fix them. I doubt you can find one misspelled word per 100 posts since inception.