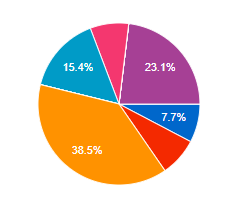 Now that we have a whopping 13 responses, here is the breakdown from my survey asking respondents to pick their favorite Kerouac book from a list:


There's a lot wrong with this survey. Too many choices for one item. Not a big enough response. No restriction on voting multiple times. No way to tell if a respondent had actually read all the choices and thus made an educated choice (versus, for example, picking the one book they had read).

Consequently, one cannot put any stock in the results, despite them looking pretty much as expected. But the point was fun (see original post), after all, and not science.

If a few more votes drift in, I'll provide another update.
Posted by Rick Dale, author of The Beat Handbook at 10:51 AM

Hey this is somewhat of off topic but I was wanting to know if blogs use WYSIWYG editors or
if you have to manually code with HTML. I'm starting a blog soon but
have no coding expertise so I wanted to get advice from someone
with experience. Any help would be enormously appreciated!

Hey I know this is off topic but I was wondering if you knew of any widgets I could add
to my blog that automatically tweet my newest twitter
updates. I've been looking for a plug-in like this for quite some time and was hoping maybe you would have some experience
with something like this. Please let me know if you run into
anything. I truly enjoy reading your blog and I look
forward to your new updates.

I'm not familiar with that widget, but I suspect one exists. Try Googling for it. It's probably right in Blogger.

Blogger is WYSIWIG or you can use HTML or a combination.

Hurrah! Finally I got a webpage from where I can actually get useful
facts concerning my study and knowledge.