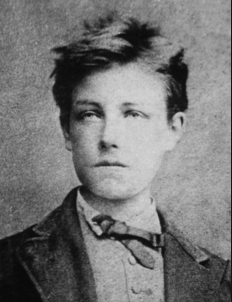 French poet Arthur Rimbaud died on this date -- November 10 -- in 1891 at the young age of 37. He influenced many other poets, including a young Jack Kerouac and the other early Beat figures like William S. Burroughs, Alan Ginsberg, and Lucien Carr. You can read a bio of Rimbaud and some of his poetry HERE.

Elbert Lenrow, who had lectured on American writers at classes Jack had taken at the New School, said of Rimbaud after publication of On The Road, "'I suppose he would have liked your people, 'the mad ones.' And you've got their quintessences'" (Jack Kerouac Selected Letters 1957-1969, 1999, Penguin Books, p. 105). Time magazine invoked Rimbaud to criticize Jack's The Subterraneans, writing that Kerouac "'is not Rimbaud but a kind of latrine laureate of Hobohemia'" (p. 137). Jack himself cited Rimbaud's influence thus:

Finally I entered a romantic phase with Rimbaud and Blake which I called my "self-ultimacy" period, burning what I wrote in order to be "Self-ultimate." (p. 248)

Don't you wish you could read what Jack burned?

Posted by Rick Dale, author of The Beat Handbook at 10:58 AM