Thursday in Kerouac-land and it's free book day 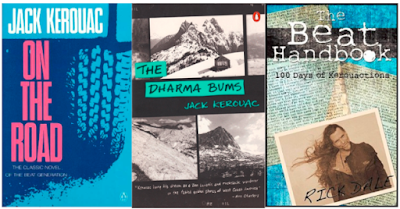 Here we are. Thursday in Kerouac-land, Maine. It snowed again. I shoveled the driveway/breezeway, front sidewalk & steps, pathways every which way, and the back deck -- again.

Why do I call this Kerouac-land? Because sometimes I feel very, very alone with my Kerouac obsession here in central Maine. In fact, I only know of one other person in the whole state who is Kerouac fan enough to attend Lowell Celebrates Kerouac (not counting Crystal, who I wouldn't call a Kerouac fan as much as a tolerant mate), and I haven't seen or heard from him in years. So I'm trying to speak reality into existence by calling this Kerouac-land.

Now, it's a big state geographically speaking but that only accounts for about 1.3 million people.

So I guess you could call me "one in a million."

But I'm not giving up until every single person in Maine has read On the Road and The Dharma Bums.

To wit, if a Mainer (defined as someone currently living in Maine) responds to this post, I will send the first such poster a copy of On the Road and The Dharma Bums as well as my companion reader to both, The Beat Handbook: 100 Days of Kerouactions (signed, of course). I will need your name and street address.

And don't post as "Anonymous" or it's likely your post will get spam filtered. And you have to put the word "Maine" and the phrase "free books" in your post to make sure I don't think it's a bot.

Anyway, how's that for a Kerouacian deal? Three free books just for posting a comment. No strings attached except paying it forward somehow (and reading the books!).

Make it so, Number One.
Posted by Rick Dale, author of The Beat Handbook at 9:51 AM

Yeah, Rick. You and me...you in Maine, me in North Carolina.

Hey, Rick, I just came across your blog. I'm a big Kerouac fan and just moved to Maine a year and a half ago, from Hawaii, originally. Just wanted to say that I enjoy your blog. Keep doing what you're doing.

Unknown, thanks for the kind feedback. Sorry you didn't win the free books! There'll be other giveaways in the future.