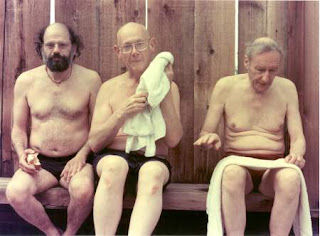 I just read this poem by Philip Whalen - center above between Ginsberg and Burroughs and wanted to share it. Whalen was Warren Coughlin in The Dharma Bums).

The dill plant lives, the airplane
My alarm clock, this ink
I won't go away

I shall be myself—
Free, a genius, an embarrassment
Like the Indian, the buffalo

Email ThisBlogThis!Share to TwitterShare to FacebookShare to Pinterest
Labels: Whalen

Crystal and I just booked a flight for San Francisco later this summer. On the itinerary: Vesuvio Cafe (where Jack hung out drinking and missed his meeting with Henry Miller in Big Sur), City Lights Bookstore, Jack Kerouac Alley, the Beat Museum, and just generally walking where the beats walked. Then we're heading down the coast and checking out Big Sur on our way to L.A. to visit my son Jason for a few days. While there I hope to take Crystal to Venice Beach, a place full of beat characters!

The non-beat itinerary includes eating at the Stinking Rose, riding a trolley, seeing the sea lions at Pier 39, touring Alcatraz (maybe), checking out Lombard Street, driving the coast highway from SF to LA, seeing a redwood tree, visiting Joshua Tree, kayaking the ocean at Monterey, visiting with Crystal's friend, Penny, and the list goes on. So much to see and do!

Oh, you'll notice I'm reading a collection of interviews with famous poets, including Allen Ginsberg and Robert Creeley (the latter I am just now learning to appreciate). Recommended.

P.S. Kudos to US Airways customer service rep Becky, who last night on the phone helped us do a multi-city roundtrip with one of us using dividend miles and the other a credit card. She was friendly, helpful, and informative. She also demonstrated an articulate command of English, which, given that it's my native and only language, is quite important when two people are trying to communicate by phone.
Posted by Rick Dale, author of The Beat Handbook at 10:17 AM 2 comments:

Jack love to invent words, so here is a new one (I think): sandouflage.

I saw a soldier earlier this week wearing the typical (of late) camouflage that is made for desert operations. It's camouflage for sand, I thought.

Dear U.S. Army: please feel free to start using this term. My fee is $1 million.
Posted by Rick Dale, author of The Beat Handbook at 8:05 AM No comments:

The following is a rant that has little to do with the general nature of this blog, but I can connect it to Jack's interest in compassion.

Yesterday morning during my routine stop for morning caffeine, the coffee shop television was tuned to one of the network news programs and featured a story on the Wesleyan student, Johanna Justin-Jinich, who last week was allegedly killed by a young man, Stephen Morgan, who had been stalking her. They showed the pictures of both, and it struck me that her picture was senior-prom-perfect, and his picture was the worst one they could possibly find (unkempt hair, jail clothing, etc.). This was all in keeping with the point of the story, of course, which was to angelify the victim and demonize the (alleged) perpetrator. (I don’t recall whether they were using the politically correct and legally advisable term, “alleged,” in their references to the latter.)

I noticed myself experiencing empathy for the perpetrator and, at the same time, anger that I was probably one of the few people watching the story who would have such a feeling, let alone admit it. “How could I have empathy for a monster?!” was the gist of the reaction I got when I opened my mouth.

I opened my mouth because for too long we have allowed those who purport to be “religious” a double standard. The older I get, the more double standards bother me.

To my knowledge, every major religion values forgiveness. And compassion (which I will translate as empathy). Christianity certainly does (“Turn the other cheek.” “Love thine enemy.”). Yet these are the same people who will actively seek this young man’s vilification – if not execution – with never a mention of the forces and experiences that brought him – a human being – to this circumstance.

I would suggest that truly religious persons would be as compassionate toward this young man and his family as they would be toward the families of the young woman. The truly religious would know what the superficially religious do not: that the most likely reason this young man committed the action of which he is accused is a significant lack of the very kind of empathy that religious people profess to be extending to others. All others. Not just those who think and worship like them, not just those who follow the rules, not just those who do what the “good book” (whichever one we happen to be talking about) says.

I think we are all a split-second away from a dire act, regardless of deceiving ourselves otherwise. We are a violent species. From road rage to bar fights to rape to war, the evidence of such is incontrovertible. And do not say that those things are done by other people! Those things are in you, too. Maybe they haven’t manifested, but they are there: all they need is the right set of circumstances and, wham, you’re a murderer. And even if you haven’t and never will kill someone, you’re responsible when it happens. Don’t you live in a country that sends your children off to kill? Did you pay your taxes? Then you supported killing. And don’t tell me you stand around at protests holding anti-war signs and that makes it okay. You can’t end violence with violence.

It’s way too easy to point fingers at killers and hold ourselves holier-than-thou when it comes to what we consider heinous crimes. We forget that those heinous crimes do not happen in a vacuum. Their motivations do not develop overnight. We – society – create the killer and we create the circumstances in which killing seems like the only option. And we go to church every week and pretend that it’s not so.

While you’re there this week, I suspect it will be quite easy to say a prayer for Johanna and her family. While you’re at it, see if you can muster up an authentic prayer for Stephen Morgan and his family.

And that will say a lot. In a truly religious mind, compassion doesn’t discriminate.
Posted by Rick Dale, author of The Beat Handbook at 10:43 AM 2 comments:

Maybe you're not familiar with Thomas Pynchon. He was a contemporary of the Beats, and my friend Charlie recommended his book, Slow Learner: Early Stories (which I actually had the economic wisdom to borrow from the library instead of buy from Amazon). 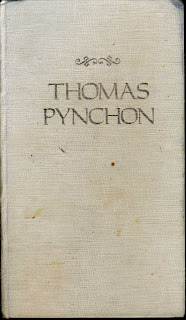 The book consists of a lengthy introduction by the author, and four of his short stories written early in his career. I'm only on page 6, but the intro is well-done and sets a nice stage for the stories to come.

On page 7, Pynchon says, "...and a book I believe is one of the great American novels, On the Road, by Jack Kerouac."

You go, Thomas!
Posted by Rick Dale, author of The Beat Handbook at 10:16 AM 1 comment:

Email ThisBlogThis!Share to TwitterShare to FacebookShare to Pinterest
Labels: Pynchon

The winner of April's free copy of The Beat Handbook is aimon for his April 3 comment about Jack taking some liberties reading from On The Road on The Steve Allen Show.

aimon, I sent an e-mail to the one listed on your blog but it was returned. Send your snail mail address to thebeathandbook@gmail.com and I'll send your book along forthwith.

This was the last free book giveaway. Here's a list of past winners: