The Beat Handbook gets a stellar review

See Wandering Stiff for a stellar review of The Beat Handbook. Today was not a stellar day, so finding out about this was just what the doctor ordered.

While you're visiting Wandering Stiff, check out the rest of this interesting blog!
Posted by Rick Dale, author of The Beat Handbook at 9:22 PM 2 comments:

Email ThisBlogThis!Share to TwitterShare to FacebookShare to Pinterest
Labels: reviews

Readers of the The Daily Beat may not be aware of my other blog where I write poetry. I set a goal this year to write 100 poems. I'm up to 15 - not on track, but gaining.

If you wish, you can read my poetry at Words Are My Drug of Choice.

Thank you for your support.
Posted by Rick Dale, author of The Beat Handbook at 12:22 PM No comments:

Email ThisBlogThis!Share to TwitterShare to FacebookShare to Pinterest
Labels: poetry

In a recent post we mentioned Charlie Parker. Click here to listen to Jack reading his ode to Charlie Parker, backed up by Steve Allen on the piano.

Good stuff.
Posted by Rick Dale, author of The Beat Handbook at 8:48 PM No comments:

You can't even make up stupid shit like this.

Dear Texas: GET A GRIP!

When State Boards of Education even ponder ideas like deleting references to the Beat Generation from social studies standards, it's pretty clear that it's all swirling around the drain, folks.

Jack's turning over in his grave.
Posted by Rick Dale, author of The Beat Handbook at 8:22 PM 1 comment:

Email ThisBlogThis!Share to TwitterShare to FacebookShare to Pinterest
Labels: texas

A friend was musing on Facebook the other day about how her mother and Jack Kerouac were about the same age, yet it was hard to picture her mom as someone from the "beat generation." I said I had no problem with it and just threw it out there that my mom, being quite a gadabout in her younger years as the wife of a prominent hotelier and frequently visiting NYC, probably had a fling with Jack. Another friend on Facebook asked, "Was it in early 1955?"

That started the wheels turning. Where was Jack in March 1955 (nine months before I was born)? Where was my mom?

It's not inconceivable that they both were in NYC at the same time. I think Jack was living with Memere in Rocky Mount, NC, having moved there to be with her in February 1955. But he probably made some trips back to NYC. Interestingly, almost exactly 9 months to the day before I was born on 12-11-55, Charlie "Bird" Parker died (March 12, 1955). That would have bummed Jack out, being such a huge fan of the Bird and jazz in general. What did Jack do when he was bummed out? Drink and bar-hop. I doubt there was too much opportunity to do that in Rocky Mount. So he probably heard of Bird's death and hopped a bus to NYC to catch up with friends and do some serious drinking. This is all speculation, of course.

Let's speculate further. Maybe mom was in NYC with dad for some convention he was attending. He would have been tied up all day, and mom would have been shopping alone during the day and meeting dad for dinner that night. They took me with them one time, and all I remember is that I tried eating ox tongue at a dinner and it wasn't half bad. Maybe mom shopped all morning and decided to get a quick drink at a local tavern. She wasn't a bad-looking woman! Here's a pic of mom and dad at the Paramount in NYC around that time. 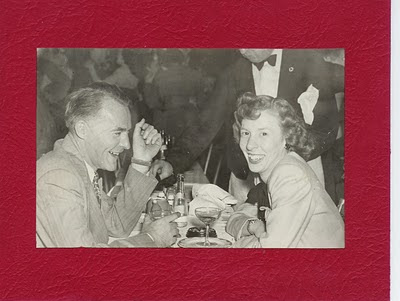 Anyway, guess who she runs into at the bar? Why, Jack, of course. You can fill in the remaining details yourself.

And now we know why I'm so obsessed with Jack Kerouac!

Seriously, folks, I'm just having fun here . . . wait a minute . . . I wonder what an heir to the Kerouac estate stands to inherit in on-going royalties?

Email ThisBlogThis!Share to TwitterShare to FacebookShare to Pinterest
Labels: illegitimate

This is only the second time Jack Kerouac’s birthday has rolled around during the existence of The Daily Beat, which started in earnest shortly after my book’s publication in September 2008. Last year we declared March as Jack Kerouac Month and posted a new Kerouaction every day of the month. You can read the lead-in post for that month here. You can read any of that month’s posts by using the blog archive on the right. The Daily Beat’s first and only post on Jack’s birthday is available here.

If you have the chance, a bunch of celebratory activities are taking place this weekend in Jack’s hometown of Lowell, MA. Click here for a schedule. While I’ve been to Lowell for Lowell Celebrates Kerouac! the last two years in a row, I’ve never attended the birthday festivities in Lowell. I really wish I could go this year because I think I’m going to miss LCK! in lieu of my band playing at The Dempsey Challenge.

Alas, we have a limited time in this world so we can’t do or be everything, a fact Jack well knew and commiserated about routinely in his writing. Speaking of time, it just struck me that Jack’s birthday falls in the same month as St. Patrick’s Day. Jack was Irish, you know, a fact about which I expounded here.
I guess I should apologize for taking the writer’s cheap way out and doing a retrospective on Jack’s birthday instead of writing something original, but this is what came out spontaneously so I’m going with it (in honor of what Jack would do, making it a true Kerouaction).

Today, in honor of the greatest American author who ever lived, read something by Jack Kerouac. Even if you don’t have a Kerouac novel handy, it’s easy to do by visiting Google books and searching for Jack Kerouac. A number of his books have limited previews there. Another thing you could do is buy my book, The Beat Handbook: 100 Days of Kerouactions, at Amazon.

That would give me two reasons to be happy today.
Posted by Rick Dale, author of The Beat Handbook at 8:36 AM 1 comment:

This article at the London Review Blog gives me encouragement about my next book. Short is fine! Plus, it sounds like Lulu.com is an easy and cheap self-publishing option.
Posted by Rick Dale, author of The Beat Handbook at 10:39 PM No comments:

Email ThisBlogThis!Share to TwitterShare to FacebookShare to Pinterest
Labels: Lulu

Funniest question The Daily Beat has ever received

Check the comments on my post about The Beat Generation Dictionary to see the funniest question ever received at The Daily Beat.
Posted by Rick Dale, author of The Beat Handbook at 8:32 PM No comments: