Before I address Kerouac-olutions for the New Year, here is an update on how I did with 2022's.

2022 New Year's Kerouac-olutions UPDATE
I only have one Kerouac-olution this year: to practice kindness. That's something I need to work on every day in every way. Click HERE for some Buddhist-inspired thinking on the subject.
Outcome: it's intangible but I think I practiced kindness more than usual this past year. I can't point to specifics, but one thing I changed was my attitude toward people of different political stripes from me. I've not engaged in arguing about such stuff on Facebook or much in real life. And my not watching so much news -- as we have been traveling away from home 87 days as of today -- has left me with less to stress about in terms of politics.
2023 New Year's Kerouac-olutions
I am maintaining my last year's resolution to practice kindness this year. We'll see how I do. I wish I could quantify what this resolution looks like in action, but I am bereft of ideas. Maybe you have some? One thing I want to do to buttress my kindness behavior is to practice breathing meditation more often.
There you have it -- an update on last year's and this year's Kerouac-olutions.
What are YOU resolving for the New Year?

Posted by Rick Dale, author of The Beat Handbook at 2:18 PM 4 comments:

Video from the Pacific Coast Highway


We are camped along the Pacific Coast Highway at the Rincon Parkway near where Jack Kerouac wrote about at the beginning of The Dharma Bums.
Here is a video of the train passing our campsite: https://youtu.be/keEMqKDJTWY
Posted by Rick Dale, author of The Beat Handbook at 7:40 PM 1 comment:

On hiatus for a spell

We are leaving Monday for a multiple month trip in our RV across the United States. While I'll have my computer with me, I don't anticipate using it daily or checking for Kerouac-related birth and death dates often enough that I wouldn't miss some. Rather than miss some dates, I am going to suspend posting about such dates until such time as I return home and have more of a routine. Hopefully, this doesn't bum any readers out too badly. I may still post from time-to-time as we hit Kerouac-related places along the way or the muse strikes me for some reason.

If you're really into knowing what Kerouac-related character was born or died on a given date, you can check the archives (over there on the right ----> -- you might have to scroll down) for past entries on that date.

Sorry for any inconvenience, but I think it's best to set low expectations for the next few months. May we get what we desire and never what we deserve.

Posted by Rick Dale, author of The Beat Handbook at 10:29 AM 3 comments: 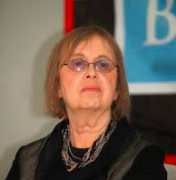 Joyce Johnson was born this date -- September 27 -- in 1935, making her 87 years old today. She is a noted and award-winning author and appeared as Alyce Newman in Jack Kerouac's Desolation Angels. Joyce wrote about her firsthand knowledge of Kerouac in Minor Characters and in The Voice is All, both mandatory reads for any true Kerouac fan. She was there when big Beat things went down, so her point of view is firsthand.

In an undated 1957 letter to Johnson (then Glassman), Jack describes the time he was on a Yugoslavian freighter on the way to Tangier and experienced a big storm:

During this ordeal I heard the words: EVERYTHING IS GOD, NOTHING EVER HAPPEND EXCEPT GOD -- and I believed and still do. (Jack Kerouac Selected Letters 1957-1969, 1999, Penguin Books, p. 11)

Posted by Rick Dale, author of The Beat Handbook at 10:28 AM No comments:

On this date -- September 20 -- Carolyn Cassady died in 2013 and Edie Parker was born in 1922. Cassady appeared in several of Jack Kerouac's works: as Camille in On The Road; Evelyn Pomeray in Book of Dreams, Big Sur, Desolation Angels, and Visions of Cody; and, Cora in Beat Generation. Edie also appeared in several of Jack Kerouac's works: as Marie in The Subterraneans; as Elly in Visions of Cody; as Edna in Book of Dreams; as Edna (Johnnie) Palmer in Vanity of Duluoz; and as Judie Smith in The Town and the City.

Don't fall into the trap of marginalizing these two influential Beat Generation women as being merely Neal's and Jack's wives. As we have said repeatedly in past posts, they were forces to be reckoned with on their own terms. Both left behind required-reading memoirs: Cassady: Off the Road: My Years with Cassady, Kerouac. and Ginsberg); Parker: You'll Be Okay: My Life with Jack Kerouac.

RIP, Ms. Cassady and Happy Heavenly Birthday, Ms. Parker.
Posted by Rick Dale, author of The Beat Handbook at 10:38 AM No comments:


Caroline "Nin" Kerouac Blake died on yesterday's date -- September 19 -- in 1964. I'm sorry I missed posting about it. She was Jack Kerouac's older sister and appeared in several of Jack's works: Nin Duluoz in Doctor Sax and Visions of Gerard; Nin in Book of Dreams, Maggie Cassidy, Visions of Cody, and Vanity of Duluoz; Ruth Martin in The Town and the City; and, Carolyn Blake in Book of Sketches. The excellent Character Key to Jack Kerouac's Duluoz Legend lists her twice for Maggie Cassidy (as Nin and Jeannette Bissonette). I asked Kerouac scholar and keeper of the key, Dave Moore, about that little wrinkle and he said (shared with permission):

Yes, it's weird. Both names are used in MC. In the first part, Jack wrote about his sister Nin, but later, when he's writing about the surprise birthday party, Nin is described as arranging it, but the hosts are described as Jeannette and Jimmy Bisssonette. (Nin married Charles Morisette in 1937.)

When I think of Nin, I always think of Jack's descriptions in The Dharma Bums (my favorite Kerouac novel) of staying with her and her husband and child at their house in Big Easonburg Woods near Rocky Mount, North Carolina. Which, of course, reminds me of the excellent book by John J. Dorfner, Kerouac: Visions of Rocky Mount (that you can purchase by contacting the author at johnjdorfner@gmail.com).

RIP, Mrs. Blake.
Posted by Rick Dale, author of The Beat Handbook at 10:35 AM No comments:

Poet William Carlos Williams was born this date -- September 17 -- in 1883. He was a significant influence on the Beat generation writers, especially Allen Ginsberg. Ginsberg discusses a 1957 visit he and Jack Kerouac and Gregory Corso and Peter Orlovsky paid to Williams here (you need to ask permission to visit the site -- I can't even access it now and am not sure how to contact the author). Ginsberg says Kerouac romanced up Williams' wife, Flossie, in the kitchen. According to Kerouac biographer Gerald Nicosia, when the visitors asked him to impart some wisdom, the 73-year-old Williams pointed out the window and smiled, saying, "'There's a lot of bastards out there'" (Memory Babe, 1994, p. 541). 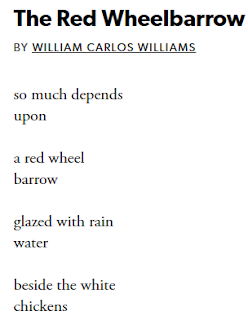 Happy Heavenly Birthday, Dr. Williams!
Posted by Rick Dale, author of The Beat Handbook at 11:14 AM No comments: