TFW you can't even give away a copy of your book

On January 7 we posted about having hit 750,000 all-time pageviews and offered a free signed copy of The Beat Handbook to the first person commenting on the post. Someone named Lloyd responded first, asking if we post to the UK. I replied that we did and requested Lloyd's snail mail address.

To date, Lloyd has not responded. I even posted a query to Lloyd on January 9. To no avail.

Therefore, since I have not heard from Lloyd, I am re-opening the giveaway. The first person to respond to this post will win a free signed copy of The Beat Handbook. No strings attached! If you respond, make sure you check back in a day or so to see if you won! I can't mail a copy of my book without a physical address (which I'll ask the winner to send me via private e-mail).

If no one responds to this offer by February 7, I shall abandon the effort and assume the worst (that no one reads my blog or no one wants my book -- or both).
Posted by Rick Dale, author of The Beat Handbook at 9:38 AM 4 comments:

Dear Lloyd: Come in, come in, wherever you are....

Someone named Lloyd was the first to comment on my previous post, meaning he is due a free signed copy of The Beat Handbook: 100 Days of Kerouactions.

Lloyd, I replied to your post but haven't heard back. I need your snail mail address. You can send it to thebeathandbook@gmail.com.

If anybody knows Lloyd, please alert him to his good fortune. Thanks.
Posted by Rick Dale, author of The Beat Handbook at 12:30 PM No comments:

3/4 of a million pageviews: Time to give away a free book 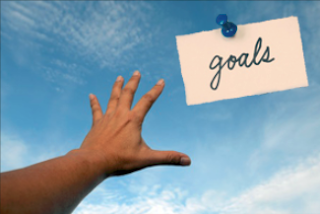 We have officially hit 3/4 of a million all-time pageviews here at The Daily Beat. 757,702 to be exact (I'm slow on the draw to post the announcement).

So, that means it's time to give away a free signed copy of The Beat Handbook. 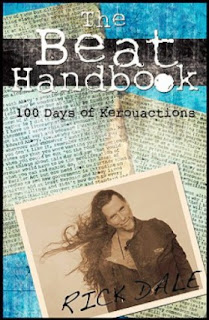 Here's how this works. Be the first person to reply to this post and you win. Simple. I'll announce the winner in a reply as well as a subsequent post. All I'll need is the winner's snail mail address and I'll take it from there.

Posted by Rick Dale, author of The Beat Handbook at 3:31 PM 2 comments:


Putting the pejorative connotations of the term "beatnik" aside, think about the implications of a Beat Generation developing in China as suggested in this article: http://www.nationmultimedia.com/detail/your_say/30335193. Right off the bat they have the Buddhist connection in play.

It's a stretch, but such articles keep Kerouac's name in the news if nothing else.


Here's a link to the original article that spawned the beatnik connection: http://www.nationmultimedia.com/detail/opinion/30335127.
Posted by Rick Dale, author of The Beat Handbook at 9:53 AM No comments:

What does Katy Tur of MSNBC have to do with Jack Kerouac?

I just finished Katy Tur's new book, Unbelievable: My Front-Row Seat to the Craziest Campaign in American History. It chronicles Tur's time assigned to the Trump Presidential campaign. It's insightful, engaging, and funny. I highly recommend it if you are into politics, or if you just want an inside look at how cable news coverage works.

But you are asking, "What does this have to do with Jack Kerouac?" (since that is the raison d'être of this blog). Well, Jack was a writer, and Tur has proven her chops in that regard with this book. I read Unbelievable in two sittings, literally not being able to put it down. She strikes me as sympatico with Kerouac in her fearless approach to writing, telling it like it is and letting the chips fall where they may. The chapter on her parents alone is worth the price of the book -- they were a fascinating news duo who started the Los Angeles News Service, paving the way for using helicopters in a major city to cover breaking news.

I guess I've now opened the door to being able to post on The Daily Beat about any books I read, and I guess that's true enough. All books have writers, and Jack was certainly that, so there's always that minimal connection. I've been doing a lot of reading in retirement, and that makes a lot of fodder for future posts.

Maybe I can contact Katy and get her to weigh in on her thoughts about Jack. I've seen her drop an impromptu obscure The Big Lebowski reference when anchoring a show, so who knows? The Dude was certainly a beat character (see video to the right of the Dude hawking The Beat Handbook), so she may be a Kerouac fan. I'll let you know....

Posted by Rick Dale, author of The Beat Handbook at 4:40 PM 1 comment:

A Million Pageviews -- Here We Come!

As I type this, all-time pageviews for this blog -- at least since we started tracking them on Google -- are at 748,884. That is nearly 3/4 of a million! Not bad for a blog obsessively -- and narrowly -- focused on Jack Kerouac (and The Beat Generation). The next big, big milestone will be 1,000,000 pageviews, and, believe me, we'll be celebrating that auspicious occasion.

For the immediate future, though, once we hit 750,000, I'll be giving away a signed copy of my book to the first person to respond to my post about hitting that particular milestone. So stay tuned for that announcement. We get several hundred pageviews on a typical day, so it won't be too long a wait....

In the meantime, you can get your very own copy of The Beat Handbook by clicking below.

Posted by Rick Dale, author of The Beat Handbook at 2:54 PM No comments:

Why Buddhism is True 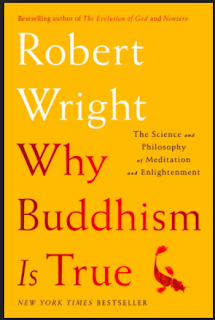 I just finished reading Robert Wright's Why Buddhism is True: The Science and Philosophy of Meditation and Enlightenment. It was a Christmas gift from Chris, my partner's son. It is an excellent and practical treatise on two cornerstones of Buddhism -- meditation and enlightenment. Wright is a fantastic guide on this journey as he is an experienced yet admittedly flawed meditator and, of course, he is a gifted writer. I particularly loved the way he showed how the tenets of Buddhism are supported by modern science.

I highly recommend this book to anyone interested in Buddhism, especially from a practical, life-changing perspective. Loyal readers know that Jack Kerouac was an accomplished student of Buddhism, having written several books on the subject (see links at the end of this post).

If you are interested in getting a copy of Why Buddhism is True, I recommend Amazon (click the link below).


Below are links to Kerouac's three books on Buddhism:

Posted by Rick Dale, author of The Beat Handbook at 2:16 PM No comments: