Crystal and I just got back from a week in California: a few days in 'Frisco and then a few with my son Jason. Below are some picture highlights.

No trip to 'Frisco would be complete without visiting City Lights Bookstore (Ferlinghetti's place) and Vesuvio Cafe (where Jack hung out). They are across Jack Kerouac Alley from each other on Columbus Avenue. 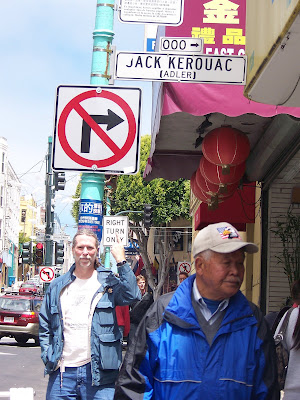 Here's a picture of me looking at a copy of The Beat Handbook that I had just reverse shoplifted into City Lights. (Later in the trip I also reverse shoplifted a copy into the bookstore at Venice Beach. Lots of beat characters in that place!) 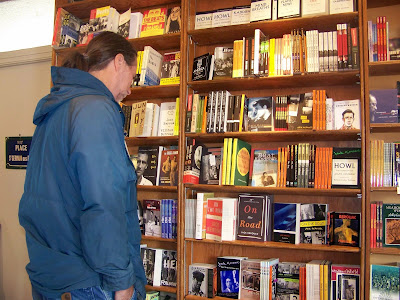 Here I am at the Vesuvio Cafe. 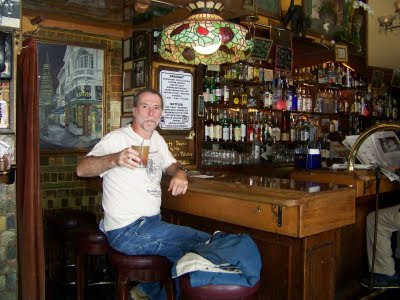 In nearby Chinatown, every other place had the "see no evil, speak no evil, hear no evil" monkeys out front. I added my own interpretation. 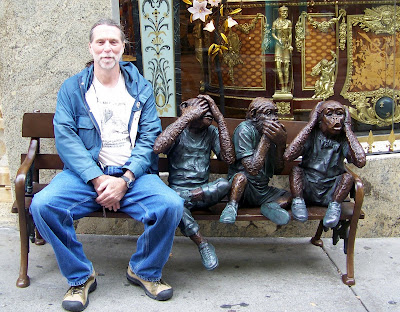 During our visit with Jason we snuck out to Joshua Tree, a magical place where I spent a few days climbing with Keith, Levi, Ira, and Jason in February 2006. We showed Crystal where we camped and we scrambled some. It was 106 degrees! No climbers anywhere. 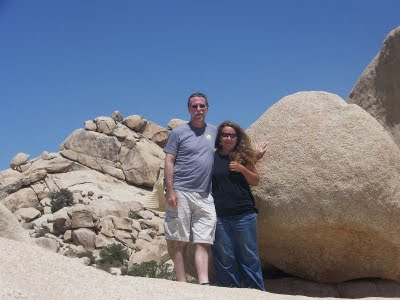 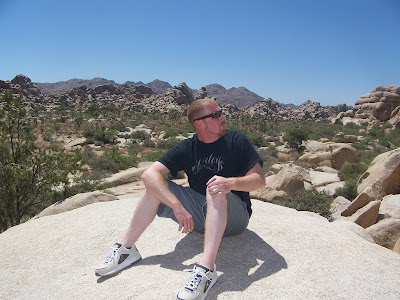 In Hollywood, Michael Jackson's star was adorned with all kinds of memorial mementos, so I left a copy of The Beat Handbook. I figure thousands of people have now seen it. Good idea, huh? I inscribed it: "Dear Michael, I hope you're digging the ride. -Rick" 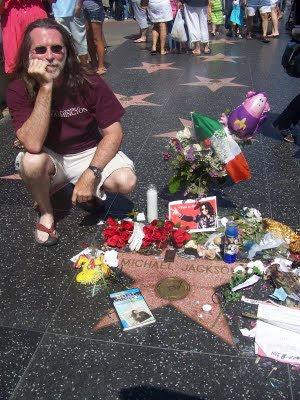 One of the highlights for me happened in Hollywood. We were walking Hollywood Boulevard and a big guy next to me stopped to take a picture of Tom Cruise's star. I didn't think anything of it but the next thing I knew, Jason was talking to him like they were old friends. The guy shook my hand and Jason said, "Dad, this is Diamond Dallas Page." I about fell over. Jason and I are wrestling fans, and Jason recognized him in baseball cap and shades and without his long blond locks (he's retired). When Jason thought he knew who it was, he said, "You're awesome," and subtly made the diamond shape with his hands that was DDP's trademark and went, "Right?" to be sure it was him. DDP suggested pictures and had us pose with him in a special way. He said he might put them on Facebook 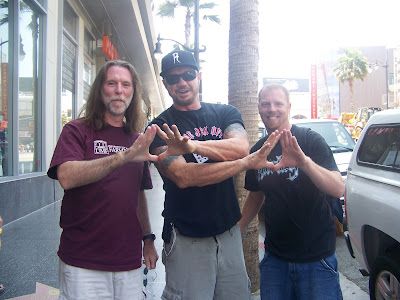 I had books with me and should have given him one, but didn't think of it until later. Check out his website: Diamond Dallas Page. He's into selling his fitness system now. I suspect that Mickey Rourke's character in "The Wrestler" was influenced by DDP, or easily could have been.

A great trip - hope you enjoyed the pics.
Posted by Rick Dale, author of The Beat Handbook at 10:47 AM No comments:

I just read that Susan Boyle, in an upcoming interview on The Today Show, claims that adjusting to celebrity has been difficult for her.

You know what, Susan? Bite me.

I finally got a poem published in print. It's in the July 2009 Letter Founder, a small 'zine out of Lewiston, Maine. First page, too.

Jack would be proud. 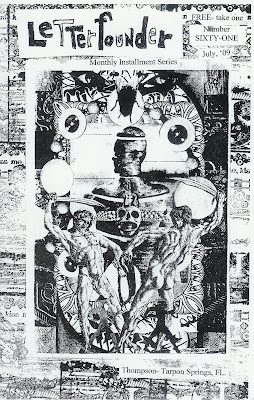 Here's the page with my poem on it: 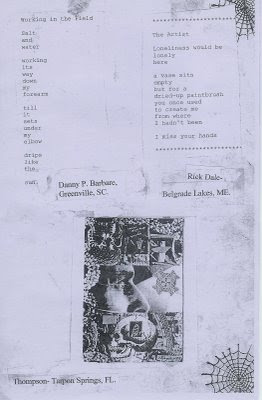 It's literally a cut-and-paste 'zine. I found it at Maine Poetry.
Posted by Rick Dale, author of The Beat Handbook at 12:19 PM 1 comment:

Lowell Celebrates Kerouac! 2009 is happening again this October 1-4. You can get on the e-list for the event by writing to Steve Edington at revsde@hotmail.com. See the schedule below.

NOTE: A $5.00 donation is requested to help defray costs and to keep this annual event for future years. THIS IS OUR SUGGESTED DONATION FOR ALL LCK TOURS OVER THE WEEKEND.

4:30 p.m. Tour: The Merrimack: Mighty Napo of New England. Meet at the top of Merrimack Street at the “Watermelon Man Bridge.” [AKA The University Avenue/Moody Street Bridge] Led by Roger Brunelle.

7:00 p.m.: Remembering Jack: Some of Kerouac’s Classmates and Friends Offer Recollections of Jack Kerouac. [Tentative: To be confirmed.]

Presentation and Tour: Cutting Classes: An Account of Jack Kerouac’s Connection to the Pollard Memorial Library. Led by Roger Brunelle and Bill Walsh.

The two above events will be held in the Community Room of the Pollard Memorial Library.

9:30 p.m. After hours event at The Village Smokehouse with Tex MacNamara and His Bucking Broncos. [Suggested donation of $5.00 at the door.]

9:00 a.m. Tour: Mystic Jack: A Tour of the Sites in “Visions of Gerard.” Meet at the St. Louis de France Church on West Sixth Street. Led by Roger Brunelle.

11:30 a.m. Commemorative at the Commemorative. This year we will observe the 40th Anniversary of the death of Jack Kerouac on October 21, 1969.

2:00 p.m. “The Revelation to Ti Jean”. A presentation by Dr. Benedict Giamo, Professor of American Studies at Notre Dame University and author of Kerouac: The Word and the Way. In observance of the 50th anniversary of the publication of Doctor Sax.

The 2009 LCK Festival is partially funded by the Lowell Cultural Council.

Dr. Giamo’s presentation is funded in part by the Parker Lecture Series.

Thanks to all who make the 2009 LCK Festival possible:

And most of all, the many Friends and Donors to Lowell Celebrates Kerouac!


Special thanks to Richard Widhu for the wonderful cover design!
Posted by Rick Dale, author of The Beat Handbook at 12:11 PM No comments: