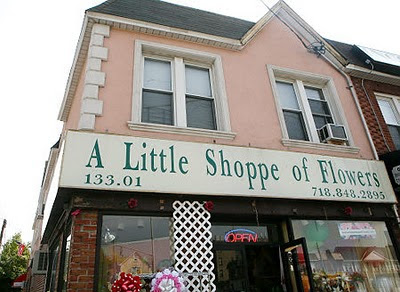 Do you know what Jack was doing this very day in 1948? Let us know your thoughts.
Posted by Rick Dale, author of The Beat Handbook at 2:23 PM 2 comments:

This article about Tiger Woods (about whom I care not a penny farthing) claims that Jack Kerouac was a Buddhist. I was forced to sign up as a user of this insipid blog in order to correct the record. Jack did not consider himself a Buddhist. He studied Buddhism. He wrote about it. But he considered himself a Catholic.

That's my understanding from the ton of reading I've done. Anyone disagree?
Posted by Rick Dale, author of The Beat Handbook at 10:11 PM 5 comments:

Email ThisBlogThis!Share to TwitterShare to FacebookShare to Pinterest
Labels: buddhism

Click here for a Life magazine piece that lets you scroll through 44 different literary figures and a brief statement about their favorite intoxicant. Burroughs is represented, as is our hero Jack. Even our friend Ayn Rand (who I think, as my regular readers already know, had an affair with Kerouac) is represented. Did you know old Ayn was a speed freak?

Bring on the booze and get writing!
Posted by Rick Dale, author of The Beat Handbook at 8:27 PM 4 comments:

Email ThisBlogThis!Share to TwitterShare to FacebookShare to Pinterest
Labels: Life 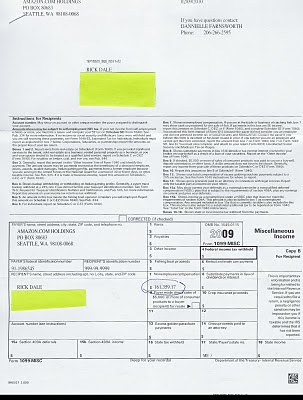 Imagine you're me. You self-publish a book with BookSurge (an Amazon company) in 2008. To date, according to your author account, 52 books have sold on Amazon. 29 of those books sold in 2009, accounting for less than $150 in royalties. Now imagine getting the above W9 from Amazon along with 16 other W9s - in separate envelopes - from various Amazon subsidiaries totaling over $300,000! Yeah! Only $299,850 too much reported to the IRS!

It turns out it was a computer error. That's fairly obvious from the bogus social security number, but still - it gave me quite a start until I investigated.

Amazon says it has corrected the error in its records, hasn't reported the faulty information to the IRS, and will be re-issuing correct W9s.

Email ThisBlogThis!Share to TwitterShare to FacebookShare to Pinterest
Labels: amazon

Jack Kerouac and the Super Bowl

One of the best Super Bowl commercials this year was a Google Search Story called "Parisian Love." Clever! Click here to watch it.

Did you know there are other Google Search Stories, one of which is a tip of the hat to our favorite author, Jack Kerouac? Click here to watch "Mad to Live," featuring what I assume is the only recording we have of Jack reading his most oft-quoted words, "The only people for me are the mad ones, the ones who are mad to live . . . ." Awesome!

By the way, this is not the first time I've written about Jack and the Super Bowl. See my post from last year here.
Posted by Rick Dale, author of The Beat Handbook at 9:49 PM No comments:

...and when I'm dead, dead and gone
There'll be one child born and a world to carry on, to carry on"

Always loved the Blood, Sweat, & Tears version of this and just learned it was written by Laura Nyro. I was thinking of it when I read that Canadian folksinger Kate McGarrigle just died and they read from Kerouac's On the Road at her funeral. Click here to read the article.

So I guess I'm compiling a list for my "funeral." Not that I even want one; I'd prefer - when my time comes - that anyone who's left that gives a shit just get together and have a big old drunken bash at whatever my favorite watering hole happens to be at the time. But at whatever event takes place, read some Kerouac, play the BS&T song above, play some bluegrass music, and lift a glass of Bushmills (21-year-old single malt) in my memory. If anything else comes to my mind, I'll be sure to let you know.

You can tell a lot about a person by their funeral. Kate McGarrigle, I'm sorry to admit I wasn't clued in on your work while you were living, but now I want to check it out. You must have been something else.
Posted by Rick Dale, author of The Beat Handbook at 3:17 PM 2 comments:

The Beat Handbook author on TV

If you want to see a video of yours truly appearing with his bluegrass band, The NitPickers, on TV last Friday night, click here.

The connection to this blog's professed topic? Why, the banjo player wrote a book about Jack Kerouac! How's that for a connection?
Posted by Rick Dale, author of The Beat Handbook at 9:33 PM No comments: