Haiku Revisited at The Beat Museum 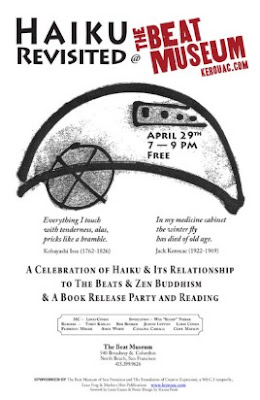 The event is closing out National Poetry Month and is titled, "A Celebration of Haiku & Its Relationship to The Beats & Zen Buddhism & a Book Release Party and Reading." For more information, click here: http://www.kerouac.com/beat_event/a-celebration-of-haiku/.

Posted by Rick Dale, author of The Beat Handbook at 9:17 AM No comments:

To keep my "at least once a week blog post" streak going, I thought I'd mention the movie version of Jack Kerouac's Big Sur. I just showed it to my Kerouac class at UMF, and they generally agreed it was better than the film version of On the Road. To be fair, they had read On the Road but not Big Sur, so they really had nothing to compare in the latter case.

However, I have read both (several times) and seen both (several times), and I definitely appreciate Big Sur over On the Road as a film adaptation. I'm not sure one is more filmable than the other, but with Big Sur they seemed to capture the essence of the book more accurately. Maybe it was the casting (way better Kerouac, very good Neal and Carolyn, great Lew Welch), or the general ambience, or the voice-overs from the book, or the gorgeous scenery...

...or maybe it was just Kate Bosworth.

In any event, what did you think of Big Sur the movie? I liked it.

P.S. We have airline tickets for California this summer and a couple of nights in Big Sur is on the itinerary (if we can find an affordable place with available rooms).
Posted by Rick Dale, author of The Beat Handbook at 3:44 PM 1 comment:

Tangential Kerouac: The future of travel

The below is from an April 2016 Esquire article by Colum McCann about bitcoin titled, "Would You Trust These Guys with Your Money?"


The future of money might look like this: You're standing on Oxford Street in London in winter. You think about how you want to get to Charing Cross Road. The thought triggers itself through electrical signals into the chip embedded in your wrist. Within a moment, a driverless car pulls up on the sensor-equipped road. The door opens. You hop in. The car says hello. You tell it to shut up. It does. It already knows where you want to go. It turns onto Regent Street. You think, A little more air-conditioning, please. The vents blow. You think, Go a little faster, please. The pace picks up. You think, This traffic is too heavy, use Quick.TM   The car swings down Glasshouse Street. You think, Pay the car in front to get out of my way. It does. You think, Unlock access to a shortcut. The car turns down Sherwood Street to Shaftsbury Avenue. You pull into Charing Cross. You hop out. The car says goodbye. You tell it to shut up again. You run for the train and the computer chip in your wrist pays for the quiet-car ticket for the way home. (p. 101)


What does that have to do with Jack Kerouac? Two things come to mind. One, he wrote for Esquire. Second, I wonder what he would have thought about where we've come and where we're going with travel.

Kerouac aside, this passage really struck me as a look into a definite future that is right around the corner, The technology exists: it's a matter of making it safe, scalable, etc.


P.S. I know how to superscriptTM in Blogger, but within block text it always forces a new paragraph and in the above example that was not acceptable.

A friend of mine, Gary Lawless (who lived with and was an apprentice to Gary Snyder in the 1970s and became an internationally known poet and environmentalist), mentioned today that he ran into a Kerouac article from Sports Illustrated in 1968. I wondered if it were on-line, and, sure enough, I found it here: http://www.si.com/vault/issue/40686/46/2. It's the January 8, 1968 issue (see above).

It's impossible to read (for me, at least), but I thought you'd enjoy seeing it. Here's a link to that issue's letter from the publisher, mentioning Jack, that you can read: http://www.si.com/vault/1968/01/08/542923/letter-from-the-publisher.

The very next issue was the swimsuit edition. Who knew they were doing it that far back?

Posted by Rick Dale, author of The Beat Handbook at 9:59 AM 1 comment: