It seems like the upcoming release of the film version of On The Road presents a marketing opportunity I might capitalize on and sell a few copies of The Beat Handbook.

Since I haven't exactly broken any sales records to date, I figured it was time to reach out to readers of The Daily Beat for some ideas.

If you were me, how would you take advantage of the film's release and the related buzz in order to hawk a book that owes its very existence to Jack Kerouac?

Post your ideas here or e-mail them to thebeathandbook@gmail.com.

Thanks!
Posted by Rick Dale, author of The Beat Handbook at 9:06 AM No comments:

Email ThisBlogThis!Share to TwitterShare to FacebookShare to Pinterest
Labels: film, guerilla marketing, On The Road

Neal Cassady's The First Third: A Review (of sorts) 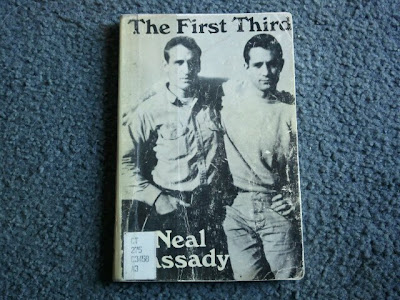 I just finished reading Neal Cassady's The First Third: A Partial Autobiography & Other Writings (borrowed from UMF's Mantor Library). In a nutshell, my head hurts yet I want more. The actual "partial autobiography," which takes up the first 80 pages, is interesting because it gives us a firsthand view of Neal's childhood with his dysfunctional family headed by his saintly alcoholic father. However, it would only be interesting to a fan of Cassady or Kerouac or the beat generation in general, because the writing, when it is not turgid, is vapid to a fault.

The "Other Writings" are all unpolished fragments, including "Adventures in Auto-eroticism," which is not at all about Neal pleasuring himself (at least not in the way one might predict from the title). Two fragments - "Neal Talking Telling Story Fall '63" and "Joe Hanns" - are basically the same story, the former (I assume) transcribed by Allen Ginsberg and the latter Neal's sophomoric attempt at formalizing the former into prose. I guess the point of including both is outweighed by the insights one gains in seeing how Neal's oral story-telling evolves into written prose. I found it singularly redundant and not enlightening at all.

It becomes clear in The First Third that, unlike Kerouac, Cassady didn't have the discipline to become a great writer, said discipline including not only extensive writing itself but also extensive rewriting (Jack did lots of re-writing, contrary to the myth that has grown up around On The Road and his marathon 3-week writing of same, all of which is total bullshit).

Now, might I have something good to say about our hero the holy goof's maiden (and almost only) literary effort? Yes. Indeed, the end of the book is its saving grace. First there is "One night in the summer of 1945...," a recollection of Cassady's first meeting with Allen Ginsberg. It's short but insightful. Next comes a series of letters, several to Jack Kerouac and one to Ken Kesey. In these letters, one sees the influence Cassady had on Kerouac's spontaneous prose writing style (as opposed to the painful autobiographical efforts earlier in the book). Reading these letters is like being on speed yourself: they ramble, dodge, soar, and change directions so that you feel like you are Cassady's brain. They are much more raw than Kerouac's writing, again supporting the fact that Kerouac revised his work, even the "spontaneous" stuff. Cassady's letters make me want to read the two collections of Cassady's letters: Grace Beats Karma: Letters from Prison and Neal Cassady: Collected Letters, 1944-1967.

Our boy never became the great writer he envisioned, but he sure had a major influence on Jack Kerouac, not only as a character in On The Road but also as a literary style muse. This alone makes reading The First Third essential to the true beat-o-phile. If you take the plunge, I'd be interested in knowing what you think.

Now, if we could only find the complete, original "Joan Anderson letter"!
Posted by Rick Dale, author of The Beat Handbook at 9:38 AM 1 comment:

More on Howl, the film

Click here for another take on Howl, the film.

Ignore the blatant dangling participle. I don't think they really mean that the author of the piece has really been branded obscene.
Posted by Rick Dale, author of The Beat Handbook at 1:14 PM No comments:

Another pic from the On The Road movie

Here's another pic from the upcoming On The Road film. I am assuming that is Garrett Hedlund playing the holy goof. The picture wasn't identified at Movie Moron - duh!

What do you think of the casting so far?
Posted by Rick Dale, author of The Beat Handbook at 2:49 PM No comments:

God's empty chair. Could Kerouac turn a phrase or what?
Posted by Rick Dale, author of The Beat Handbook at 5:13 PM No comments:

Email ThisBlogThis!Share to TwitterShare to FacebookShare to Pinterest
Labels: Shearing

Beat pics and a Howl trailer

Click here for some beat pics and a Howl trailer.
Posted by Rick Dale, author of The Beat Handbook at 5:09 PM No comments:

Pics from On The Road 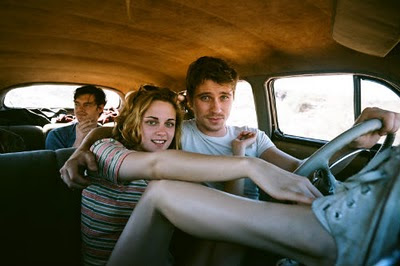 Pics from the movie version of On The Road surfaced this week. Click here for a story with a hotlink to the pics.

In particular, the physical casting seems okay based on this one. The jury's out on the acting, especially Kristen Stewart.
Posted by Rick Dale, author of The Beat Handbook at 1:22 PM 1 comment:

Regular followers of The Daily Beat know that today is Neal Cassady's birthday. The "holy goof" would have been 85 today (that's how old both my father and mother were when they died, 20 years apart). Instead, he died at age 41 after attending a wedding in Mexico, cause officially "unknown" but drugs and/or alcohol were likely involved. He was 4 days short of being 42, so even Jack outlived him in age and even by the calendar.

Of course, we all know Neal as the real-life inspiration for the Dean Moriarty character in On The Road and Cody Pomeray in other Kerouac novels. If you haven't yet read Visions of Cody, it's time. Jack credits his writing style to Neal's spontaneous prose he sent to Kerouac in long rambling letters, the most famous one being lost (the "Joan Anderson letter," mentioned in this blog previously). After a falling out between the two, Neal went on to notoriety as the driver of Ken Kesey's bus, Furthur (for a trip into that world, read The Electric Kool-Aid Acid Test by Tom Wolfe).

I'm currently reading Neal's autobiography, The First Third, and so far it's been an enjoyable glimpse into his childhood. Neal didn't leave behind much of a written literary legacy, but both his writing style and his memory will live on forever in Kerouac's roman a clef novels.

In honor of Neal's birthday today, my best advice to you is be spontaneous and dig life. Go go go!


P.S. By way of coincidence, today is also the birthday of my great friend, Keith, who introduced me to Kerouac in the first place. Synchronicity. HBD, Keith.
Posted by Rick Dale, author of The Beat Handbook at 8:39 AM No comments:

What will we do if On The Road is a hit?

We may be facing a dilemma. What will we do if the movie version of On The Road is a big hit and America gets all Kerouac-y? It reminds me of Barbara Mandell's hit, "I Was Country When Country Wasn't Cool." Part of the beat allure, at least for me, is that it's on the fringe in a lot of ways. Yes, Jack enjoys quite a bit of literary acknowledgement, but he likewise suffers a lot of abuse at the hands of critics and the public (especially if the latter is uninformed).

I'm not sure how I'd feel if loving Kerouac becomes mainstream, even for a time. What could be worse than a bunch of people running around idolizing Kerouac simply because they jumped on the latest Hollywood bandwagon?

I doubt the movie will be a critical or a popular success, but I do wonder about the results of such an outcome, particularly popular success. Don't forget, fame helped drive Jack to an early death. What might it do posthumously?
Posted by Rick Dale, author of The Beat Handbook at 4:50 PM 1 comment:

Denver mayor Guillermo "Bill" Vidal has proclaimed this Friday to be Neal Cassady Day. A free event, hosted by the Mercury Cafe, coincides with the anniversary of Cassady's death — his birthday is four days later. It will feature music, poetry readings and a clip from a new documentary about the man's life and times.

See you in Denver!
Posted by Rick Dale, author of The Beat Handbook at 6:40 PM No comments: