I just read on Twitter that the UK Kerouac Convention (click here) slated for July 2013 has been canceled because of poor ticket sales.
Posted by Rick Dale, author of The Beat Handbook at 3:00 PM No comments:

It's a Kerouac Sunday – as they all are, kind of like how a red-sun October day is the best – waking up in the piney wood-smell streamside camp among the red squirrels, crows, grey squirrels, herons, frogs, osprey, chipmunks, turtles, goldfinches, hermit thrushes, bluejays, eagles, muskrats, raccoons, deer, beavers, water snakes, spiders, butterflies, loons, ducks, cormorants, and other assorted sentient beings going about their business without a care about the crucifixion (see D.H. Lawrence's Self-Pity) – absalom comes to mind – don't forget the mosquitoes either or the flying squirrels who only visit at night . . . . but it's raining today and I only know most of them are here from memory as only the squirrels and crows are braving the weather – the shack's a little bigger than Jack’s on Desolation Peak and there’s no Hozameen looking over my shoulder but there's a dark feeling coming down the river carried on misty fingers and settling in my aching bones, achy from sleep, age, damp bedclothes . . . . And that's about it, about all I wanted to say today, another on “the good side of the grass” (the day's not over yet) as they say down at the local watering hole in Gardiner home of Edwin Arlington Robinson (not of the Swiss Family) who's buried there, too – found his grave once and read Richard Cory aloud after a good swig of Bushmills (as is my practice at author gravesides – Thoreau, Kerouac, Frost to date with Dickinson on the short list). It's only two days past solstice but real October's coming, that bittersweet month of crisp smells that transitions into long winter snow doldrums when I dream of todays and wonder if they'll ever come around again or soon enough to save me . . . . It's a big old mystery anyway 'cause where spirituality's concerned all systems and all beliefs are wrong – only the creatures matter and they don't care about sophistry only the moment and if we all spent more time there we'd end human suffering – who knows we’ve never tried it – ask the little ones they have it figured out and don’t even know it.Happiness visits the smallest of things. That's all I know.
Posted by Rick Dale, author of The Beat Handbook at 10:57 AM No comments:

The Town and the City 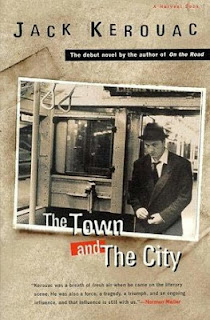 I started reading The Town and the City yesterday. I'm up to Chapter 7 (p. 45). Once I finish it, I will have read all of Kerouac's novels (at least once).

As I said on Facebook today (in the Jack Kerouac group), it's Jack and it's not Jack. You can hear his voice from On the Road and The Dharma Bums, etc., but it's more constrained (more classic in form). And it's definitely autobiographical (roman à clef) like his later novels, although even more heavily fictionalized. For example, whereas Kerouac's parents, Leo and Gabrielle, are clearly represented by George and Marge Martin, the Martin family includes eight children (not counting Julian, who, like real-life Gerard Kerouac, died), not three (Caroline, Jack, and Gerard). One of the eight is Julian's twin brother, Francis. I gather from other sources that characters in The Town and the City are sometimes composites, blending several real-life people into one fictional characters (e.g., some have suggested that Francis Martin is a composite of William S. Burroughs, Gerard Kerouac, Hal Chase, and Jack Kerouac).

If you haven't yet read The Town and the City, I recommend it. I know I'm only 9% of the way through it, but I'm confident it will continue to engage me throughout. I want to know what happens to Peter and Joe and Ruth and Francis and Mickey and Rose and Charley and George and Marge (there's a third daughter but she hasn't appeared yet for some reason).


Posted by Rick Dale, author of The Beat Handbook at 10:26 AM No comments:

Kill Your Darlings is set for a limited release October 18 with a nationwide release to follow. Click here for my source.

Personally, I think Jack Huston will be excellent as Kerouac. We'll see . . . .
Posted by Rick Dale, author of The Beat Handbook at 10:13 AM No comments:

I think it would be fun if hundreds of Daily Beat readers commented on this article in defense of our hero, Jack Kerouac. We won't change the author's mind, but we could at least gum up the comments section.
Posted by Rick Dale, author of The Beat Handbook at 10:20 AM No comments:

The Harry Ransom Center at the University of Texas at Austin has acquired the Peter Orlovsky archive. Click here for the news release.

Correspondence in the collection highlights Orlovsky’s many connections with other poets, authors and artists. There are more than 1,600 letters written to Orlovsky and/or Ginsberg, including 165 letters written by Ginsberg himself. Some notable correspondents include Gregory Corso, Lawrence Ferlinghetti, Ken Kesey and Robert LaVigne. Orlovsky also wrote regularly to his parents and siblings, and more than 65 of his letters are included in the archive.

The collection features more than 2,650 photographs taken by or of Orlovsky, documenting the years between 1970 and 2010. Also included are eight reel-to-reel tapes from the 1960s and more than 120 audiocassettes made by Orlovsky during the 1970s and 1980s, some recording conversations with Ginsberg.


The Kerouac connection, of course, is Orlovsky's relationship to Kerouac intimate and inner circle Beat Generation member Allen Ginsberg. While the news release doesn't mention Kerouac as represented in the archive, he's bound to be referenced. Kerouac scholars and others will have access once the archive has been processed and cataloged (catalogued looks more correct to me but I suspect that is a British spelling).

See you in Austin.
Posted by Rick Dale, author of The Beat Handbook at 4:16 PM No comments: 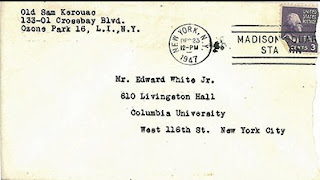 If you have an extra $1.25 million lying around that you don't know what to do with, consider bidding on this collection of Kerouac letters (click here).
Posted by Rick Dale, author of The Beat Handbook at 10:22 AM No comments: 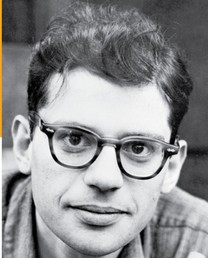 Were he still alive, beat poet extraordinaire Allen Ginsberg would have been 87 years old today. One of the inner circle of the beat generation and a close friend of Jack Kerouac's, Ginsberg is known especially for his poem, Howl, which was the subject of a famous censorship trial in 1957 (and a recent movie starring James Franco).

Happy Birthday, Allen.
Posted by Rick Dale, author of The Beat Handbook at 8:15 AM No comments: