I've been thinking about death this week as I had traveled back to Pennsylvania last weekend to attend a good friend's funeral. Here is what I wrote about him on Facebook on March 12 when I found out the news. He was only 62 years old.

I just learned that a long-time close friend of mine, Tom Hoover, died yesterday. We became friends in high school, both being in band and playing trumpet. I looked up to him as a role model (he was a year ahead of me in school). I'll always remember his shenanigans at band camp in the summer. Tom and I and Dave Fisher and Jim RJ Dunham and Karl Frantz et al. lifted weights together in the basement of the Penn Wells Motel for years way before it was even a generally acceptable practice. Tom always outdid everyone. I don't talk about this much, but I more or less followed him to college, Lock Haven, to major in physical education. His going there for that major played a big role in my decision. He left before I got there and went in the Army. I still have a card he sent me right before he got out of the Army and signed it, "Happy Tom." In 1978 or so we were both living in Wellsboro and we started playing bluegrass together in a band called Cold Spring with Steve Belcher and Danny Shipe. That band morphed into North Fork, which stayed together with Tom and me and Bob Rubin as a core for over 25 years. Over those years Tom inspired me to learn to play the guitar. I never would have played out solo without his inspiration. Indeed, anything decent I play on the guitar is directly from Tom's playing. And my guitar is Tom's old 1973 D-28 that I bought from him when I was first learning to play when I lived in Mansfield. The case still has all the stickers on it he put there (I'm looking at it through misty eyes as I type this). When I was heating our old farmhouse with wood and Jason Dale was just a glint in my eye, Tom and his dad Ray and I cut a shitload of firewood on state forest lands and brought it out in Ray's old Dodge Powerwagon. Suffice to say, a lot of who I am today is directly related to being friends with Tom, and while we didn't stay in touch much after he moved away except for the occasional e-mail, I've always considered him one of my closest and dearest friends. I miss him already and the news hasn't even sunk in yet. RIP, brother. You're out of pain now but the world is a lesser place.


You could say that Tom was my Neal Cassady, as I shambled after him like a dingledodie from the time I met him in high school.

But I titled this piece "Kerouac: On Death," so what gives there? Well, as any true Kerouac fan knows, Jack was obsessed with death. The deaths of his older brother, Gerard, and of his father, Leo, had a great impact on Jack and he wrote about both in his novels. He wrote an entire novel as an homage to Gerard titled, Visions of Gerard, and started his opus, On The Road, with the words, "I first met Neal not long after my father died...." (scroll edition, not the classic).

Then there's this famous passage from Visions of Cody (you know, the passage Jack read on the Steve Allen show while appearing to read from On The Road):


I'm writing this book because we're all going to die--In the loneliness of my life, my father dead, my brother dead, my mother faraway, my sister and my wife far away, nothing here but my own tragic hands that once were guarded by a world, a sweet attention, that now are left to guide and disappear their own way into the common dark of all our death, sleeping in me raw bed, alone and stupid: with just this one pride and consolation: my heart broke in the general despair and opened up inwards to the Lord, I made a supplication in this dream. (Visions of Cody, Penguin, p. 368)

Speaking of religion, Jack's Catholic roots and Buddhist studies certainly influenced his views on death, but I've run out of time for more thoughts today. Suffice to say that Jack Kerouac was no stranger to death or to thinking and writing about it. In beautiful ways. To wit, here's an oft-quoted passage and one that gives me comfort when I think of my friend, Tom. It's from the 211th Chorus of Mexico City Blues:


Posted by Rick Dale, author of The Beat Handbook at 10:50 AM No comments:

On The Road: Chapters in One Sentence 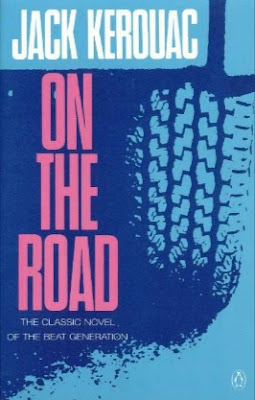 Each time we've read On The Road in my Kerouac class at the University of Maine at Farmington (every spring since 2013), I have had students work in groups to craft what I call, "Chapters in One Sentence." It's a way to summarize the narrative and leaves us with a concise overview of the novel. I don't edit their content, but I do try to correct major grammatical and spelling errors. Some of the entries are my own, as we don't have enough time in class to do all the chapters.

You may find what you think are inaccuracies or omissions, but keep in mind this is a first-year class and it's only an in-class activity to get the students talking about what they read. I think it's interesting to see what they find important.

Here's a link to the document: https://docs.google.com/document/d/1vxQnIgoYD4gIvhczjPE8KLDi2sXnWFHbtaszumZDSNE/edit?usp=sharing

One of these days I may undertake to create the whole document myself from scratch just to see what it looks like. If I do, I'll share it with readers of The Daily Beat.


Posted by Rick Dale, author of The Beat Handbook at 5:01 PM No comments:

Jack Kerouac was born this date in 1922. He would have been 95 years old today.

Happy Birthday to an iconic American writer and hero of The Daily Beat.

I'll be reading some Kerouac today in his honor.
Posted by Rick Dale, author of The Beat Handbook at 8:20 AM 1 comment: 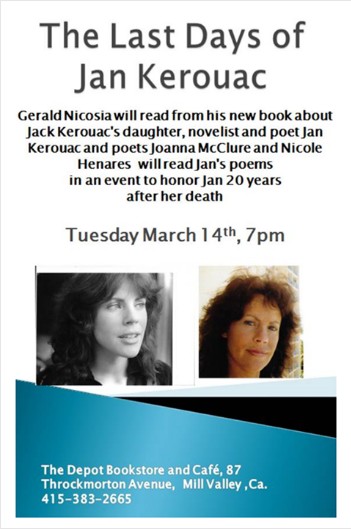 Posted by Rick Dale, author of The Beat Handbook at 8:14 AM No comments:


According to several social media reports, long-time Jack Kerouac Estate executor John Sampas died on Thursday March 9. While I don't see anything in the news, there is an empty obit page here and a piece on Beatdom here,

This is significant news for the Kerouac community. Who will step into the role of executor? Will it be Jim Sampas, John's nephew? Or are there others jockeying for power?

It will be very, very interesting to see how this plays out. But for now, condolences are in order.


Posted by Rick Dale, author of The Beat Handbook at 8:12 AM 2 comments:

It's March 5. What can we say about that date and Jack Kerouac (during his lifetime)?

Well, we've been blogging about Jack Kerouac here at The Daily Beat since July 15, 2008. That will make 9 years come this summer. How many times do  you think we've blogged on March 5 in those 9 years?

But what else can we say?

I searched the Cosmic Baseball Association's chronology in vain for a March 5 event, and, in fact. by my count the month of March only shows up 23 times in the whole chronology. That in itself is weird, weird, weird (see my post about the number 23 here).

I didn't mine any of my many Kerouac biographies because that would be pretty tedious going. There may well be something in there.

A Google search for "March 5 and Jack Kerouac" yields one interesting but inaccurate hit. According to This Day in Jazz History, Kerouac recorded Poetry For The Beat Generation with Steve Allen on this date in 1957. I'm not sure that's accurate. The CBA's chronology shows Kerouac in Tangier from February through March 1957, and it's pretty clear from multiple sources that the recording happened after Kerouac's disastrous Village Vanguard performance. The latter was certainly December 1957.

The information accompanying Rhino's The Jack Kerouac Collection states that Poetry for the Beat Generation was "Possibly recorded March 1958." It would seem that the official re-release of this recording would state its exact date were it known. What we're left with is that Kerouac may or may not have made this particular recording on March 5, 1958.

One fairly certain Kerouac event on a March 5 was John Brooks' review of The Town and the City appearing in The New York Times (Source: The Beat Generation FAQ, p. 52).

Another is that Kerouac wrote a journal entry in 1948 (Source: Windblown World, p. 58). It had to do with writing 500 words, typing a manuscript, and going into N.Y. at night and running into a "big crowd of new people" (with "much drinking, talking, etc.").

All of this makes me wonder if it would be possible to create a daily Kerouac calendar showing an event from Kerouac's life each day of the year. I'd buy it.


Posted by Rick Dale, author of The Beat Handbook at 4:51 PM No comments: