Responding to Contempt: The Kerouac Way

Arthur Brooks says that the problem with politics today is not opposing views. It's how we treat each other with contempt.

Politics doesn't have a monopoly on contemptuous interactions, as evidenced by a recent interaction in the Jack Kerouac Facebook group. I won't go into detail. Suffice to say it's a longstanding divisive issue, and it seems to me that the only way to move past it is to follow Jack Kerouac's advice in The Dharma Bums: "Compassion is the heart of Buddhism."

If we would act compassionately toward one another in the face of contempt -- or as Arthur Brooks says, if we would meet contempt with kindness -- we might actually change the world for the better.

Alas, it's easier said than done.

One thing I'm sure about is that name-calling will never result in peace. And peace ought to be our mutual goal.

Here's a link to Arthur Brooks talking about this. It's a video that is internal to Facebook, so if you are not a Facebook user, Google him on YouTube along with the word contempt and you will find similar videos: https://www.facebook.com/harvardkennedyschool/videos/10154251688431403/

God, I'm tired of all the hate: here, there, and everywhere. Peace out....
Posted by Rick Dale, author of The Beat Handbook at 3:17 PM No comments:

When the UFO phenomenon hit the front pages on July 8, 1947 because of the Roswell "flying saucer" incident, our hero Jack Kerouac was living in Ozone Park and just about to hit the road on his first of several cross-country trips that he would later memorialize in On The Road.  What did he think about the UFO phenomenon? I'm not sure. I did a Google search and a quick scan of a couple Kerouac biographies, his letters, and the Facebook Kerouac group: nothing. I need to do more in-depth research.

My own interest in UFOs probably started on Saturday afternoons during my youth, when my friends and I watched Monster Movie Matinee, featuring B-movies like Earth vs. the Flying Saucers, The Thing From Another World, The Day the Earth Stood Still, It Came From Outer Space, etc. I've never had much of a personal UFO sighting experience, although I've seen some weird things in the skies, most notably during a bluegrass festival in upstate New York in the 80s. But I digress....

For the last couple of years, I've been listening to podcasts on my drive to and from work. For one reason or another, I got hooked on a couple in particular that take up the topic of anomalous phenomena (or "Forteana" - see my previous post here) like UFOs, cryptozoology, the paranormal, and the like. My favorites are The Gralien Report, Where Did the Road Go?, and Radio Misterioso.

One of my favorite guests on those podcasts is Red Pill Junkie (RPJ), who I recently commissioned to do this drawing of Crystal:

.
If you're interested in having RPJ do some graphic work for you, he can be found on Facebook and Twitter as well as his blog at https://absurdbydesign.wordpress.com/.

RPJ recently did the cover art and contributed an article to an anthology titled, UFOs: Reframing the Debate, so I felt compelled to get the book and read it. RPJ asked me to write a review on Amazon, which I will do, but I decided to publish it here on my blog as well.

So, without further ado, here is my review. What does this have to do with Jack Kerouac, you ask? Stay tuned for a future blog post....

A Review of UFOs: Reframing the Debate

There is a disturbance in the ufology force, and it is a book titled, UFOs: Reframing the Debate. Edited by Robbie Graham, this anthology brings together pieces by 14 different authors who each bring a unique and cutting-edge perspective to a field which of late seems to have lost its way, with many researchers zealously fixated on the ETH (Extraterrestrial Hypothesis) and focusing their efforts exclusively on nuts-and-bolts explanations.

As Diana Walsh Pasulka points out in the foreword, “leaving behind the ‘nuts-and-bolts’ approach and embracing the complexity of how the phenomenon affects and shapes belief frees researchers and allows them to gain a broader view of the mechanisms of the phenomenon.” That is the case with the 14 authors included here, who expose the reader to everything from personal experiences to thought experiments in an effort to understand -- not make conclusions -- about what is going on with UFO contact events.

After Dr. Pasulka’s cogent foreword, editor Graham -- no stranger to ufology -- presents an introduction framing the anthology and providing a concise summary of each author’s contribution. A brief biography of each author is included at the end. One of the extremely valuable features of the book are the extensive and relevant citations within the entries as well as in the endnotes. One could follow this path of literary breadcrumbs and easily go down a ufology reading rabbit-hole for months if not years.

There’s something here for veteran ufology fans and researchers as well as for beginners, but a word of caution is in order: there is some tough going here. The authors do assume a certain amount of prior knowledge, plus they are not afraid to challenge longstanding beliefs and perspectives. There are times when readers will be tempted to put the book aside because an author’s perspective is so out of alignment with their own, but as Graham advises, “Don’t do that.” There is a great pay-off for thoughtful persistence through each of the entries.

In this wide-ranging and brilliant collection regarding the current state of ufology, the reader can expect to learn about parapsychology, the role of belief, parasociology, cultural influences, religious connotations, high strangeness aspects, a new classification system, the back story of the Roswell Slides debunking, co-creation, anarchist subversion, trauma analogies, the importance of empathy, and more.

What does all of that have to do with ufology? Get a copy of the book and find out. You won’t be sorry.

Posted by Rick Dale, author of The Beat Handbook at 10:48 AM 1 comment:

I was aware yesterday that it was Allen Ginsberg's birthday, but I delayed blogging in order to take the easy way out and have something to blog about today (Sundays are the first day of the week in my calendar and I am trying to keep up a weekly streak of posting that has gone on for some time).

Happy 91st Birthday, Allen. While admittedly this is a Kerouac-obsessed blog, without Ginsberg there would be no Kerouac, at least not as we know him today. Ginsberg was a muse to Kerouac as well as a tireless -- and effective -- advocate for getting  Jack's work published.

In his honor, here is a goofy picture of Allen  I'd never seen until yesterday. 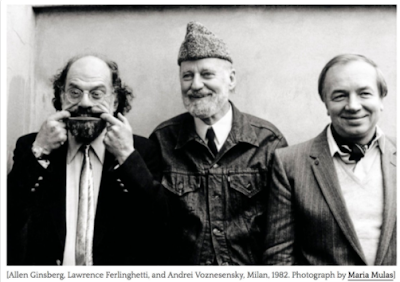 Posted by Rick Dale, author of The Beat Handbook at 8:21 AM No comments: