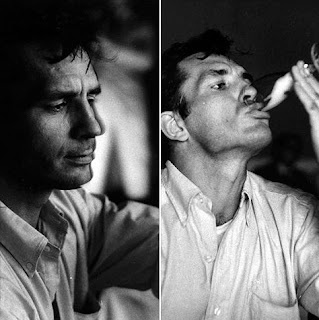 If you're looking for a place in cyberspace that is all-Kerouac-all-the-time, think about joining the Jack Kerouac Group on Facebook. You'll see pictures like the above (allegedly Jack drinking outside the Kettle of Fish in the West Village on MacDougal Street in the fall of 1957). You'll see tributes to Jack. You'll see pictures of places Jack used to live. You'll see discussions of various Kerouacian matters that range from the academic to the sublime. You'll see a video archive, a photo archive, and a files archive, the latter including a variety of informative documents such as a Kerouac discography and a guide to Lowell places. You'll see over 8,000 members!

Dave Moore, Kerouac scholar extraordinaire from the U.K., is the main administrator of the group, and he contributes frequently. Other respected names in the Kerouac community are likewise well-represented.

If you're already a member, I give you the Kerouacian secret salute.


Posted by Rick Dale, author of The Beat Handbook at 2:13 PM No comments:

Jack Kerouac and The Hobo Ethical Code of 1889


Regular readers of The Daily Beat need no edification on the connection between Jack Kerouac and hobos (or hoboes, if you like -- both terms are acceptable). Back in 2010 we published a post containing a link to The Hobo Code, the hobo visual language used to communicate important information to each other (click here). That blog post also contains a list of hobo lingo. The former is from the National Hobo Museum and the latter is from Wikipedia. I have investigated the veracity of neither. Nevertheless, both may provide interesting glimpses into hobo culture.

I recently ran across this piece on Open Culture: The Hobo Ethical Code of 1889. It sets forth 15 rules for hobo living that were supposedly adopted by the Hobo National Convention (they still have one in Britt, Iowa -- click here). Jack, in his travels, certainly lived some of these rules. I'm thinking in particular about #1, "Decide your own life; don’t let another person run or rule you." Jack certainly marched to the beat of his own drummer. And #15 -- "Help your fellow hobos whenever and wherever needed, you may need their help someday." -- reminds me of the time he gave a shirt to a fellow hitchhiker (in On The Road) or selflessly shared his cigarettes, grub, booze, etc. with fellow travelers.* Jack lived other items in The Hobo Code as well. Can you identify them? For sure, Jack ignored #6: "Do not allow yourself to become a stupid drunk and set a bad example for locals’ treatment of other hobos."

On a related note, if reading about life on the road -- particularly hobo life -- appeals to you, I recommend you read Jack London's The Road and Jack Black's You Can't Win. We've mentioned these books in previous posts. They are fascinating firsthand accounts of the hobo life, and were influential on Kerouac and other Beat writers. You can get London's book here. I didn't find a free version of Black's book on-line, but it's pretty cheap on Amazon and I'm sure other sites. I've read that the Robert Aldrich film, Emperor of the North, was loosely based on London's book and one about London by hobo author, Leon Ray Livingston, who went by the name A-No. 1. I haven't verified the latter beyond Wikipedia. We now live in a post-truth world anyway, so I'll be forgiven if I am perpetuating misinformation. Anyway, here's the trailer: https://www.youtube.com/watch?v=5jn-ZS7g8xs. It's probably not an accurate representation of real hobo life, but I remember seeing it when it first came out and it made an impression on me, mostly because of the testosterone-fueled acting by Lee Marvin and Ernest Borgnine.

Note that some distinguish the term "hobo" from "tramp" and "bum" in that they see hobos as impoverished migrant workers, tramps as those who work only when they have to, and bums as those who don't work at all. From my readings, I'm not sure those distinctions hold water in reality. I try to explain that to my students all the time: we're a species that lives to categorize and yet those categorizations and resulting labels are not as precise in the real world as they seem in theory.

In any event, Jack Kerouac -- if not a hobo himself - lived a hobo-esque lifestyle at times and was not averse to hanging out with these itinerant masters of living on the cheap, beholden to no one and nothing except The Hobo Code.

*I know, I know. One should not assume that because Sal Paradise does something in On The Road that it actually happened in real life. However, in this case I think we an be confident that this or something like it was a Kerouaction (see The Beat Handbook).


Posted by Rick Dale, author of The Beat Handbook at 7:33 AM No comments: 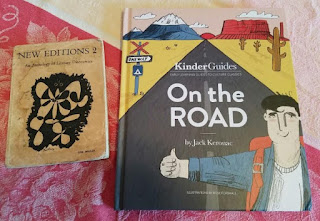 Let the word go forth from this time and place that someone, depending on the timing of things, needs to make sure that my collection of Kerouac and Beat items (mostly books) doesn't get boxed up and given to Goodwill or the like when I leave this mortal coil. There are a number of items in there that are worth holding on to or at least selling. I guess I need to amend my will in that regard.

To wit, on the left above is my recently acquired (thanks, eBay) copy of New Editions 2, which is what Jack Kerouac was reading from at the Village Vanguard in 1957. It contains his piece, "Neal and the Three Stooges." This was printed by Pinchpenny Press in Berkeley and was limited to 1,000 copies. It's in rough shape, so it's worth less than a mint copy would bring, but it's worth a lot more than the $1.00 it cost in its day.


On the right above, and don't tell my grandson Hugh because it is a Christmas gift this year (which means it is still adding to the Dale Kerouac collection), is the KinderGuides version of On The Road. It is pretty neat the way they de-adult Jack's classic -- removing all the drinking, drugging, and sex -- and focus on the friendships, travel, and adventure. KinderGuides has a number of  "early learning guides to culture classics." See https://www.kinderguides.com/.

Oddly, this KinderGuide credits the illustrator, Rose Forshall (who did a nice job) but not whoever wrote the adapted text. See the example below. 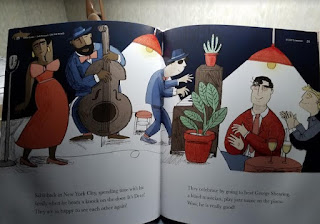 Neither is there anything about permissions from the Kerouac Estate for publishing this. Interesting....

If  you have a young one on your shopping list, I recommend this KinderGuide. It's not a perfect re-telling, but it's good. And it's always cool to hold a little piece of history in your hand such as New Editions 2.

P.S. I know I need to stop buying books and downsize for retirement, and I plan to do that at least with non-Kerouac items. I'm even reading a book on Kindle right now. Oh, the humanity....

Posted by Rick Dale, author of The Beat Handbook at 11:56 AM No comments:

This is my post for the week. To keep up my streak. It's free-form, unplanned, rather stream-of-consciousness. Squeezing words out of nowhere. Maybe they'll take the shape of a Western haiku...

I don't know what that haiku means. But it means something, if not everything, if not blue resonant human. Someone may pick up on that.  I furthermore don't know why I posted that particular picture of Jack, or why it magically placed itself mid-blog instead of where I thought I put it (the beginning). Mysteries....

As I often say, what does this have to do with Jack Kerouac (the raison d'être for this blog)?

To wit, it's writing. Jack was a writer. It was the reason he was put on this earth, the reason beyond reasons, beyond relationships, fame, accomplishments, joy, kicks, darkness. Beyond fatherhood.

And it's my writing. No one else's. It may be read and it may not. But it made its way into existence by force of will and a few calories expended at the keyboard.

I wonder...what happens to a blog when the author dies? Or one's book on Amazon? I wonder these things not because I think I'm going to die anytime soon, but it is definitely the fourth quarter of the game and one thinks about such things. Was Jack thinking about his legacy as an author during his last conscious moments? Or was he thinking about the things most people think about at that juncture such as words left unspoken to loved ones, worries about those left behind, or regrets over wrongs unatoned?

I've often said we regret opportunities not taken more than past actions. Maybe that's idiosyncratic. I don't know. I do know I hope that on Wednesday you don't regret what you did or didn't do with your vote in tomorrow's Presidential election in the U.S. I hope you deliberated and then chose wisely.

And with that brief noncommittal foray into politics, I will take my leave on this autumn Monday in Maine, golden leaves blowing and the sky a cerulean blessing.

God help us all....
Posted by Rick Dale, author of The Beat Handbook at 8:58 AM No comments: