Curation #63 from my Kerouac bookshelf: Trip Trap: Haiku On The Road by Jack Kerouac, Albert Saijo, and Lew Welch 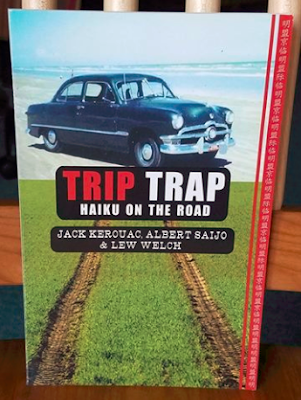 Item #63 in my Kerouac bookshelf curation project is this paperback City Lights/Grey Fox 1998 (no printing number) edition of Trip Trap: Haiku On The Road by Jack Kerouac, Albert Saijo, and Lew Welch. It's in very good condition, 68 pages, about 5-5/8' x 8-1/4". Provenance is unknown, but given that a number of poems have red checkmarks next to them and I don't remember doing that, I presume I bought it used, probably from Amazon (which you can do below but I don't recommend paying $2,484.79). This edition includes introductory pieces by Welch and Saijo and four letters from Welch to Kerouac.

Trip Trap is a set of poems handwritten by Kerouac, Saijo, and Welch during a road trip in Welch's car from San Francisco to New York City just before Thanksgiving in 1959. They were first published in 1973, after Kerouac and Welch had died (1969 and 1971 respectively). Saijo died in 2011.

This is great stuff from three masters. I've written about Saijo (click here) and Welch (click here) before. Don't expect traditional 5-7-5 haiku format, or much that even resembles Kerouac's "Western haiku" (3 lines, no syllabic restrictions).


The new moon
is
the toenail of God

It's a poetry potpourri, plus you have the introductory pieces from Welch and Saijo as well as Welch's letters to Kerouac. I recommend it.

Below is a picture of Shelf #2 of my Kerouac bookshelf showing the placement of this book (13th item from the left) on the day I started curating my collection. Next up: Mexico City Blues by Jack Kerouac.