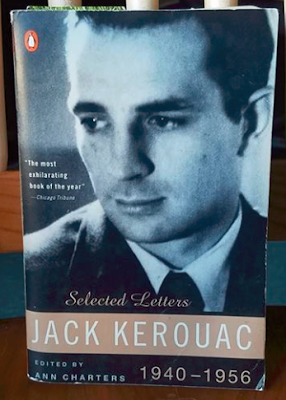 Item #71 in my Kerouac bookshelf curation project is this paperback 1996 Penguin Books 1st printing of Jack Kerouac Selected Letters 1940-1956 edited by Ann Charters. It is the first of two volumes of Kerouac's letters edited by Charters, the second volume covering 1957-1969 (and being curated next). This 629 page copy is about 5" x 7-5/8" and is in good condition. The provenance is uncertain, but I likely ordered it through Amazon (which you can do via the link below).

Kerouac was a prolific writer. While he was churning out thousands of words per day on his novels and poems, he was also at the same time writing thousands of words in his journals and, as this book shows, in letters to various people. This book comprises letters Jack exchanged with everyone from childhood friends like Sebastian Sampas to Jack's mother Gabrielle to wives like Edith Parker & Stella Sampas to fellow Beat writers like Allen Ginsberg & William S. Burroughs to Jack's sister Caroline ("Nin") to Holy Goof and muse Neal Cassady to friends like John Clellon Holmes & Carolyn Cassady (more than a friend) & Philip Whalen & Gary Snyder to editors like Malcolm Cowley & Robert Giroux.... And the list goes on. Most are from Jack, but a few are to him.

Charters capably annotates the 203 letters in this volume with brief introductions as well as explanatory footnotes. There's a fairly comprehensive index that eases research for Kerouac scholars. Overall, I rate this and the second volume as some of my favorite items in my Kerouac collection. These letters provide valuable insights into Jack's life events as well as his thought processes and relationships, and they are, of course, written by Jack Kerouac! So, they are golden.

Below is a picture of Shelf #2 of my Kerouac bookshelf showing the placement of this book (21st item from the left) on the day I started curating my collection. Next up: Jack Kerouac Selected Letters 1957-1969 edited by Ann Charters.


Posted by Rick Dale, author of The Beat Handbook at 9:38 AM