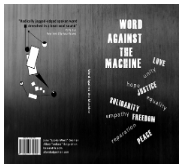 Every once in a while something comes along out of the blue that restores one's faith in humanity, and that's what I want to say about this book of poetry. Sent to me unsolicited for review by co-author Jane 'SpokenWord' Grenier, it reminded me that there are others out there who are beyond disturbed at the state of our world, from the corruption in politics to the devastation of our environment to the corporate takeover and ruination of everything holy.

I get the sense -- from Jane's nickname and from the available audio recordings of several of these poems accompanied by co-author Albey 'onBass' Balgochian  on bass -- that this poetry is meant to be experienced auditorily, such as at a slam poetry or spoken word event. Nevertheless, it stands on its own as solid poetry whether read aloud or in silence.

The themes of these poems are founded in resistance to the evils facing us in this country today, from the current occupant of the White House ("I woke up to an orange man president with a wig hat on" in "Darkness of Knight, p. 7) to the corporatization of the food supply ("those who control the food, control the world" in "Those who Control the World, p. 37) to the destruction of the environment ("I'm her to tell you that it's you that I fear, all that smell you smear on daily from your toes up to your hair" in "Anthrax and Bombs," p. 19) to the folly of religion ("as long as it's your version of god then you're happy" in "Bang your Dead," p. 28) to racial injustice ("where is your outrage?" in "Reparations," p. 36).

Co-author Balgochian lends his mysterious line drawings to the book. The last three poems are strong back-and-forth collaborations with poets Michael 'Warrior' Bonds, Art Collins, and John Sinclair. In one of them you'll see a reference to "the King Alfred Plan." I won't say more about that, but you may want to Google it.

There are connections to Jack Kerouac here. Grenier uses neologisms such as "politricks" and "deNOTcracy" in "I Write" to make her points. Jack would dig that. And her poem "I am a poet" was chosen for publication in "We Are Beat," the National Beat Poetry Foundation Anthology 2019. There's a Beat flavor to this poetry, as well as a Beat attitude toward social conventions. Finally, it's poetry, and Jack was a poet of considerable note as we've pointed out repeatedly in this blog.

Overall, this book is a wake-up call, a call to action from a devout member of "the resistance" who understands that "silence is death" (in "Winter has come to America," p. 12). As such, I can only say huzzah and encourage readers to buy the book (available at https://janespokenword.com/purchase.html, where you can also buy the audio versions).


Posted by Rick Dale, author of The Beat Handbook at 1:41 PM