According to this website, below is a picture of the "mountain shack" (that's what Jack called it) Kerouac lived and worked in as a fire lookout on Desolation Peak in the North Cascades in 1956. He writes about that experience in Desolation Angels and The Dharma Bums. 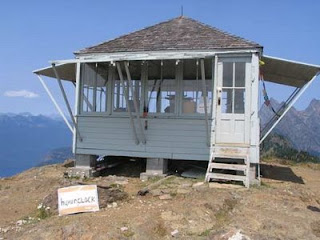 This website has a bunch of cool pictures of the shack and the surrounding beauty, accompanied by text from Jack's novels. The latter site says the shack is 14' by 14', was built in 1933, and is still used by the forest service.

Sign me up for a month this summer! I'm taking June. Crystal wants July.

Yair!
Posted by Rick Dale, author of The Beat Handbook at 11:13 AM

A terrific sight! Honestly, it reminds me of many old "houses where nobody lives" here, in Russia, found easily even around lanes close to central streets. I don't even mention villages, it can be seen in large cities as well. So, this might be an alternative worth considering!

Wow! What a find, what a spot - awesome to imagine writing in such an isolated space. Thanks for posting, Rick.