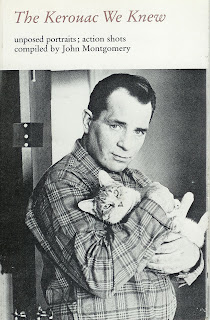 I have a copy of the above classic book titled The Kerouac We Knew, compiled by John Montgomery and published by Fels & Firn Press in 1987. Only 1500 copies were printed; that's why, I guess, you'll pay $25 or more for a 46-page paperback (or over $100 for one of the 100 signed copies). It's one of my prized Kerouac possessions. I highly recommend you snatch one up for yourself - the essays are priceless.

The book contains an introduction and then nine brief essays by different people remembering Jack. One is titled "Footnotes from Lowell." The author is identified only as "By a Lowellite," but the text reveals that the author was in his or her teens when Kerouac died and had a paper route which served Jack's house at the time.

Sometimes the author's mother used to give Jack a ride home when she worked the night shift at the Lowell Sun with Charlie Sampas.

One evening, he persuaded them to stop off at Droney's Pub on Broadway, his favorite, prior to Nicky's: maybe in December, 1953. At one point he got off a stool and collected all the empty Harvard Ale bottles (brewed in Lowell, now defunct: Kerouac's favorite beer, in green bottles with a cork). When he had gathered an armful, he restoppered them and one by one and slipped them into the old woodburning Franklin stove in the center of the floor. The few people who did notice him figured he was just stoking the fire (the only source of heat). After he had filled the stove with 15 or 20 bottles he left the lid off and resumed his silent seat at the bar. Within minutes the pub was transformed into a diminutive Pearl Harbor. Kerouac just sat on his stool, surveying his work, laughing like a madman. This is the kind of escapade for which Jack is remembered in Lowell; escapades that poked fun at Lowell people in a loving way (p. 27).

This episode reveals the prankster side of Jack, but also his favorite beer. Here's a picture of a Harvard Ale can. I can't find a picture of Harvard Ale in the green bottle with a cork. Maybe a reader can help us out? Here are some Harvard Ale coasters on ebay. And a serving tray.

Jack's favorite beer: Harvard Ale in a green bottle with a cork! What is the modern equivalent?
Posted by Rick Dale, author of The Beat Handbook at 9:19 AM