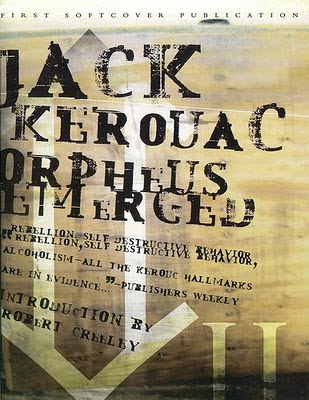 I just finished Kerouac's Orpheus Emerged. It was written in 1945 when Jack was just 23 but not released until 2000 (by his estate).

And it shows. I found it incredibly tedious to get through. Was it in part my high expectations? I don't think so. I really wanted to like it, but it was impossible. It is sophomoric at best, and its only saving grace is that one sees glimmers - brief and not very bright - of the master-to-be, especially in some of the character development and his roman a clef style. The book is a must-read for a diehard Kerouac fan, but I have no other reason to recommend it and nothing else worth saying about it. Well, one more thing. The denouement tries so hard to be literary and hip and mystical that it accomplishes none of these aims.

Sorry for the pan, Jack. I'm starting Vanity of Duluoz tonight in an effort to cleanse my palate and redeem your good name.

Oh, and one saving grace emerged: seeing how lousy Jack was at the beginning of his career gave hope to this aspiring writer.
Posted by Rick Dale, author of The Beat Handbook at 8:48 PM