As I read about current characters who exemplify beathood, I will be naming each of them as a "Beat Hero" and featuring them here on The Daily Beat.

To wit, click here to read about Travis Tribble, seen in this article busking outside Vesuvios in Jack Kerouac Alley.

Travis Tribble, Beat Hero #1 in a series. If you know any Beat Heroes, let me know.


Below is the text of the story and a picture for when the link dies (as it inevitably will). It is from SFGate on June 24, 2011.* 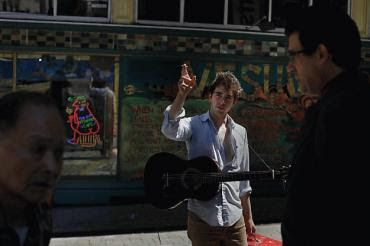 Sitting on the edge of his sheetless bed, Travis Tribble takes a drag off the last cigarette in his possession. Soon he'll have to leave the tiny room he rents in North Beach in search of funds to buy more, but for now he needs to sing. A new idea just came to him. He scribbles lyrics on a notepad. He belts out a melody at the top of his lungs. He seems free. Tribble, 25, came to the city just two months ago by way of Seattle with $70. He bought a pawn shop guitar and after a few days of pavement pounding settled on the Liguria Hotel. The joint's gritty vibe and poetic inhabitants seemed to match his style. The fact that Caffe Trieste was just a stone's throw away may have helped clinch the decision. The down-the-hall bathrooms, however, did nothing of the sort. He says money isn't important to him. He works two days a week at a coffee shop to pay rent and busks on the sidewalk for other luxuries. His mom wants to know when he's coming home. Tribble insists he won't until his ambitions have failed. "It's the city of my dreams," he said.

*All copyright laws were summarily ignored in posting this information.
Posted by Rick Dale, author of The Beat Handbook at 10:46 AM

Travis, is this you? http://www.youtube.com/watch?v=f0Kn7wBFzS8

Give me a shout some time - I'd like to interview you for The Daily Beat.