Review of Jan Kerouac: A Life in Memory 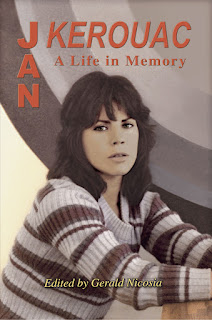 The book begins with an introduction by Nicosia in which he describes learning about his friend Jan's death in 1996 at age 44. At the time of her death, Jan was embroiled in the infamous legal battle over her father's estate, a battle which was joined by Nicosia as her literary executor. She didn't live to see the court decision in 1999 in which a Florida judge ruled that the signature on Kerouac's mother's will that left his estate to Jack's third wife, Stella Sampas (who in turn left it to her own siblings in 1990), was forged. Yes, you read that correctly: forged. I don't want to turn this post into an attempt to unravel this complicated legal battle, but I will point out that Jack said, in his final letter - written October 20, 1969, the day he was taken to the hospital where he died the next day - the following (I took this directly from Jack Kerouac: Selected Letters 1957-1969, edited by Ann Charters):

I just wanted to leave my "estate" (which is what it really is) to someone directly connected with the last remaining drop of my direct blood line, which is, me sister Carolyn [sic], your Mom, and not to leave a dingblasted fucking goddamn thing to my wife's one hundred Greek relatives.

Paul did not benefit in Memere's (Jack's mom) will. Nor did Jan. However, while Jack didn't mention Jan in his letter, it is eminently clear what he wanted: for his own bloodline to benefit from his estate. It is also blatantly evident what he did not want: for his wife's relatives to benefit at all. And yet, Memere's will left the estate to Stella Sampas. Now we know - from a legal ruling - that her signature on the will was forged. Asking "Who benefited?" from such a forgery is certainly instructive. Anyway, as this goes to press, the legal wrangling continues (I posted an article about it here).

Nicosia details systematic attempts to erase Jan Kerouac from literary history. Even while alive, she was expelled from a 1995 New York University conference about her father when she asked Allen Ginsberg for permission to address the audience about the need to preserve her father's literary estate intact (versus being sold off piecemeal as has happened since under Sampus control). Nicosia states:

There sat Kerouac Estate Executor John Sampas, right next to NYU's Program Director, Helen Kelly, yelling viciously, and perhaps even gleefully, "Get her out of here!"

Nicosia goes on about the effort to blacklist Jan, but I won't take the time to expound upon that here. He admits that this book is mainly a response to that blacklisting, but also says:

...this book comes from more than the fact that Jan Kerouac was a key part of Jack Kerouac's life--even if only the "missing element," as she liked to say, "who enabled him to be who he was." She was indisputably a tremendous writer in her own right, and her work needs to be revived, read, and studied as the contribution of a major post-Beat writer herself.

Consider me officially recruited in that effort. I am sure that Jack would want his daughter's work given its due. I have copies of Jan's two books, Baby Driver and Trainsong, and will be reading and reviewing them here in the coming weeks. If this puts me at odds with certain contingencies in Lowell, so be it. No one is going to tell me what to read or what to discuss in my own blog. Even bigger than that, right is right. I've witnessed firsthand in Lowell how Nicosia is treated - all because he went to bat for Jan - and it just tweaks my sense of justice.

But back to the book. Beyond the wonderful reminiscences previously mentioned, it contains over 40 black-and-white photographs of Jan at different points in her life, from an alluring 13-year old Jan in vamp makeup in New York City's Lower East Side, to a pensive Jan riding with Allen Ginsberg to the Grammies in 1990, to a wistful Jan in a "What now?" pose at Jack's grave in 1994, to a determined Jan taken about two months before she died.

The book concludes with an insightful, 35-page interview with Jan that Nicosia conducted in 1979. In it, she waxes philosophical about her father, her childhood experiences (including being locked up in Bellevue), her relationships, and her views of herself as an artist. This interview alone is an important contribution to Beat history, and by itself justifies the cost of the book. The wonderful pieces by various people who knew Jan are icing on the cake. Granted, the book was edited by a close friend and confidante of Jan Kerouac, but Nicosia makes this fact abundantly clear throughout. Any reader who cries bias is just stating the obvious, and the multiple reminiscences by various authors more than balance out any potential bias present in Nicosia's few subjective sections.

I highly recommend this book. It's an intimate look at the life of Jack Kerouac's daughter, which should pique the interest of Kerouac fans. However, I hope you will consider getting a copy because you want to read about the fascinating life of a spirited and unique author, Jan Kerouac.

For information on ordering Jan Kerouac: A Life in Memory, click here.
Posted by Rick Dale, author of The Beat Handbook at 3:56 PM

I was continually struck in the interview with Jan how she held no grudge against her father while at the same time acknowledging how badly his absence and lack of recognition of her screwed up her life, or at least influenced, if only at a subconscious level, many of the choices she made regarding men and drugs. She was a pretty remarkable person to proffer such forgiveness, especially at a time when she knew she was dying as a result of those bad choices.

Stella Sampas was my aunt and the Will wasn't forged. She cared for Jack's mother for a long time

Jack Kerouac was known to say vicious, intemperate things about the people closest to him, including his mother, who he was so famously devoted to, and allied with - so his alleged written comments regarding the Sampas family is not particularly persuasive, or reliable. Gerald Nicosia himself is someone who insinuated himself into Jan Kerouac’s life and, with an eye to advancing his own fame and renown, has given Jan spectacularly poor advice. He is not a man to be trusted, in my view.

I'd find your screed much more credible if you identified yourself instead of hiding behind an anonymous screen name. Nevertheless, and despite your post containing an ad hominem, I am publishing it so that readers of The Daily Beat can see an example of the unkind comments I get when the subject of Gerald Nicosia comes up. Some I have not posted because they are too disgusting.

You're welcome to your opinion, as am I. Mr. Nicosia has only been trustworthy in the many interactions I have had with him. At least he identifies himself on-line when he takes a position about something.

Following is a reply from Gerald Nicosia. Everything below -- in quotes -- is verbatim from his e-mail to me.

"My friendship with Jan is well documented in hundreds of photos and hundreds of letters. I met her in 1978, interviewing her at the apartment of Carol Ross in San Francisco, and we quickly became friends. I later helped her meet people who knew her father, which was something she desperately wanted to do, to get to know him better. We shared a wry, almost black sense of humor and also had both grown up workingclass so understood what it's like to look up at life from the bottom. About 40 of her letters to me are published in the Thunder's Mouth Press edition of BABY DRIVER, and they give a very clear picture of how much she thought of me (and I of her). This can hardly be called 'insinuating into someone's life.' I helped her to get BABY DRIVER published, and helped her again and again, and I was not going to let her down when she discovered that her grandmother's will was forged. The evidence was overwhelming--please read the court transcripts in Florida. Stella was not a bad woman, but like most Greek women of that time, she did what her brothers told her. And let's face it, some of her brothers were gangsters--running bookie, prostitution, and other operations. Nicky's was a bottomless bar and people sometimes got sex from the girls there. I have tried to be gentle in my talk about the Sampas family but I am getting sick to death of these unfair attacks, and if you want to take the gloves off, okay, I'll take them off."