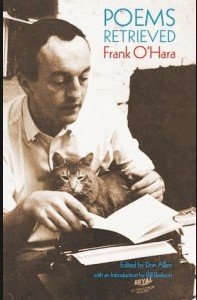 I'm in receipt of a new expanded version of Poems Retrieved by Frank O'Hara, published by City Lights. Once I finish reading it, I'll post a review here on The Daily Beat.

In the meantime, readers may want to note that our hero Jack Kerouac had an "interesting" interaction with O'Hara at a poetry reading in 1959. Jonny Metro posted about it here. Poems Retrieved was edited by Don Allen, who edited Kerouac's Good Blonde & Others.


Among the most significant post-war American poets, Frank O'Hara grew up in Grafton, MA, graduating from Harvard in 1950. After earning an MA at Michigan in 1951, O’Hara moved to New York, where he began working for the Museum of Modern Art and writing for Art News. By 1960, he was named Assistant Curator of Painting and Sculpture Exhibitions at MOMA. Along with John Ashbery, Kenneth Koch, James Schuyler, and Barbara Guest, he is considered an original member of the New York School. City Lights published O'Hara's Lunch Poems in our Pocket Poets Series (#19) in 1964. He died in 1966.

Posted by Rick Dale, author of The Beat Handbook at 6:30 PM