Summer 1956: Jack Kerouac and Edward Abbey alone together in the American wilderness 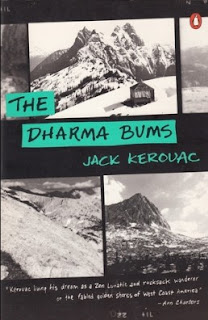 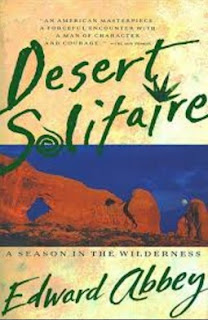 I've been reading David Gessner's All the Wild That Remains, a half memoir/half biography of Edward Abbey and Wallace Stegner. Abbey has been, for over a decade, one of my favorite authors. His book, Desert Solitaire, is a towering achievement and worth re-reading at least once a year (preferably in the southwest, most preferably in desert wilderness if  you can find any left). It's a book inspired by Abbey's time spent in 1956 and 1957 as a seasonal ranger for the National Park Service at Arches National Monument near Moab, Utah. While he was not always alone -- there were a few hearty tourists who frequented the place at the time, whereas now it's over-run, and apparently his wife and young son occasionally lived with him in his seedy trailer, a fact he fails to mention in Desert Solitaire -- Abbey was able to spend significant time alone and communing with his beloved desert. The book is quite simply an American masterpiece and you absolutely have to read it if you haven't already. If  you have, read it again.

My Kerouac sisters and brothers probably know where this is going. Abbey's tenure at Arches National Monument lasted from April to September each year. While he was experiencing nature in its rawest form and writing about it in the summer of 1956. our own Jack Kerouac was living alone as a firewatcher in a shack on top of Desolation Peak in the North Cascades in Washington State, an experience he wrote about briefly in The Dharma Bums (my favorite Kerouac novel) and extensively in Desolation Angels (and in Lonesome Traveler, too).

This means that two of my favorite authors wrote two of my favorite books based largely on journals they kept during the summer of 1956 while working for the National Park Service in totally or semi-isolated jobs in the middle of starkly beautiful and remote wilderness locations.

Read that paragraph again. How synchronistic is that?

Now, forever, when I think of Jack Kerouac's time on Desolation Peak, I will think of Edward Abbey 1,200 or so miles away in Arches National Monument, both of them engaging firsthand with the beauty of nature and creating written descriptions of their experience that will stand as testaments to the wilderness for all time (or until Abbey's fears come true and our assault on nature results in our own demise as a species).

P.S. No need here to bring up the famous Abbey quote wherein he was quite critical of Jack. Abbey had his serious personal flaws, too, and we'll just leave it at that.

Posted by Rick Dale, author of The Beat Handbook at 12:07 PM