A Sunday haiku for Jack Kerouac 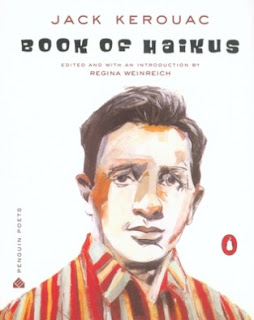 I'm no expert on haikus, or Kerouac, or anything -- really! -- but I was thinking about haikus this morning for some reason. Lately I've gotten so I journal in haiku, a practice which has yielded several hundred over the last few months ( about 370 to date).

Now, you might take a peek at my journal and say that what I have been writing are not haikus because, while they are three lines, they do not follow the traditional 5-7-5 syllable format. Jack Kerouac would beg to differ with that observation, saying:


I propose that the "Western Haiku" simply say a lot in three short lines in any Western language. Above all, a Haiku must be very simple and free of all poetic trickery and make a little picture . . . . (source: http://www.haikuworld.org/books/kerouac.html)

Here's an example of a haiku I wrote while sitting at The Dugout, my regular bar in Farmington, ME, on April 6:

Now that haiku may not stand-alone very well, but when I re-read it (remember, this is my journaling technique) it brings back memories of that particular moment -- for me! And that's the point of a journal.

And so, per this post's title, here is a Sunday haiku that I just wrote this very moment:

What does that have to do with Jack Kerouac? Well, it's a Western Haiku. And besides, everything connects to Kerouac. But you already knew that.

Write a haiku today and don't worry about syllables. Just create an image or a feeling in as few words as possible in three lines. You can do it! You might even like it enough to try it as a journaling technique and end up with hundreds of haikus. Next you'll think about publishing them, and a Pulitzer is not far behind. Think big, right?

Posted by Rick Dale, author of The Beat Handbook at 8:09 AM