Happy 59th Anniversary to Jack Kerouac's On the Road 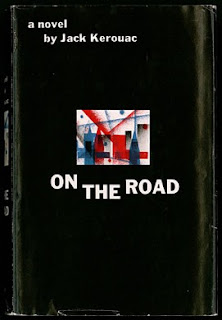 Jack Kerouac's On the Road was published on this date in 1957. It received a rave review from the New York Times (read it here: https://www.nytimes.com/books/97/09/07/home/kerouac-roadglowing.html). Interestingly, this review was written by Gilbert Millstein, who was substituting for the vacationing reviewer, Orville Prescott, who would likely not have given the book a positive treatment. Indeed, three days later another New York Times reviewer, David Dempsey, wrote a less glowing review (read it here: https://www.nytimes.com/books/97/09/07/home/kerouac-roadbr.html).

Nevertheless, the original review helped launch Kerouac to fame and he is now a permanent part of the American literary canon because of not only On the Road but also his other masterpieces like Visions of Cody, Dr. Sax, Visions of Gerard, The Subterraneans, and the list goes on....

Below is a passage from On the Road in celebration of its anniversary. This is from near the end of Part One Chapter 1. It explains the protagonist's fascination with Dean Moriarty, real-life Kerouac muse Neal Cassady.


Yes, and it wasn't only because I was a writer and needed new experiences that I wanted to know Dean more, and because my life hanging around the campus had reached the completion of its cycle and was stultified, but because, somehow, in spite of our difference in character, he reminded me of some long-lost brother; the sight of his suffering bony face with the long sideburns and his straining muscular sweating neck made me remember my boyhood in those dye-dumps and swim-holes and riversides of Paterson and the Passaic. His dirty workclothes clung to him so gracefully, as though you couldn't buy a better fit from a custom tailor but only earn it from the Natural Tailor of Natural Joy, as Dean had, in his stresses. And in his excited way of speaking I heard again the voices of old companions and brothers under the bridge, among the motorcycles, along the wash-lined neighborhood and drowsy doorsteps of afternoon where boys played guitars while their older brothers worked in the mills. All my other current friends were "intellectuals"--Chad the Nietzschean anthropologist, Carlo Marx and his nutty surrealist low-voiced serious staring talk, Old Bull Lee and his critical anti-every-thing drawl-or else they were slinking criminals like Elmer Hassel, with that hip sneer; Jane Lee the same, sprawled on the Oriental cover of her couch, sniffing at the New Yorker. But Dean's intelligence was every bit as formal and shining and complete, without the tedious intellectualness. And his "criminality" was not something that sulked and sneered; it was a wild yea-saying overburst of American joy; it was Western, the west wind, an ode from the Plains, something new, long prophesied, long a-coming (he only stole cars for joy rides). Besides, all my New York friends were in the negative, nightmare position of putting down society and giving their tired bookish or political or psychoanalytical reasons, but Dean just raced in society, eager for bread and love; he didn't care one way or the other, "so long's I can get that lil ole gal with that lil sumpin down there tween her legs, boy," and "so long's we can eat, son, y'ear me? I'm hungry, I'm starving, let's eat right now!"--and off we'd rush to eat, whereof, as saith Ecclesiastes, "It is your portion under the sun."


Happy Anniversary to On the Road! Next year will be 60 years. We'll have to do something special. Yair!
Posted by Rick Dale, author of The Beat Handbook at 10:30 AM