What is the 27th sentence of the 27th Kerouac book on YOUR shelf? 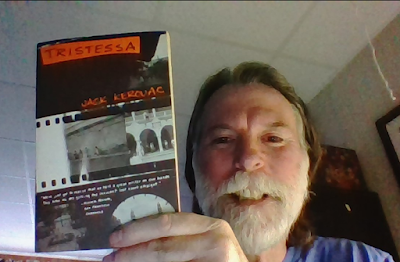 In honor of it being August 27, I decided to open the 27th book on my Kerouac shelves and find the 27th sentence, mostly because I am fresh out of much to say today, but also because numerology casts a certain spell on me at times.


She [the hen] wants to come up near me and rub illimitably against my pant leg, but I dont [sic] give her encouragement, in fact havent [sic] noticed her yet and it's like the dream of the vast mad father of the wild barn in howling Nova Scotia with the floodwaters of the sea about to engulf the town and surrounding pine countrysides in the endless north--It was Tristessa, Cruz on the bed, El Indio, the cock, the dove on the mantelpiece top (never a sound except occasional wing flap practice), the cat, the hen, and the bloody howling woman dog blacky Espana Chihuahua pooch bitch (Penguin, 1992, pp. 13-14).

And even with all of that, I may have misapplied my own rules and that's not even the 27th sentence from the 27th book on my Kerouac shelf no matter which way you cut it. I may have even counted the books incorrectly the way my brain has been acting lately.

No matter because it's a bunch of words slung together by the master wordsmith himself, and how can you go wrong with that? Unless of course someone accuses me of plagiarism, in which case I will successfully invoke the fair use doctrine and that's all there'd be to that.

P.S. Feel free to report in the Comments on the 27th sentence of the 27th Kerouac book on your own shelf. If you don't have that many Kerouac books, what's the 27th sentence of the last Kerouac book on your shelf? If they're in piles and not on their ends in library style, just figure out a coherent and consistent way to count (always bottom up, then left to right, whatever). Oh, and you really should own at least 27 Kerouac books (I counted 48 authored by him on my shelves, and there are others strewn about the house). But it's not a contest. Just go with the flow and have fun....

P.S.S. Finally learned how to use my laptop's webcam to take pictures!
Posted by Rick Dale, author of The Beat Handbook at 5:32 PM