Who Walk in Darkness by Chandler Brossard: A review of sorts 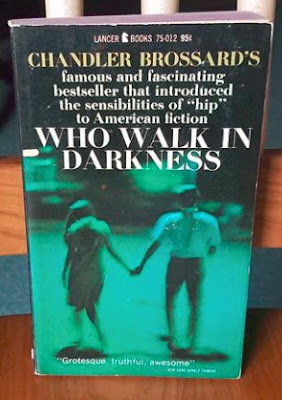 I borrowed this book from my great friend, Richard Marsh, who was turned on to it by UK Kerouac scholar Dave Moore (keeper of the wonderful Character Key to Kerouac's Duluoz Legend). I read it in about three sittings across two days. While it covers some of the same ground as Kerouac (young adults living a bohemian lifestyle in downtown NYC circa 1948), Chandler Brossard's terse style is quite different from Jack's spontaneous and rambling prose. The main characters drink a lot and smoke "tea" (marijuana) and have uncommitted sex with each other and discuss literary subjects.

According to Wikipedia (always suspect), Brossard was not happy that reviewers characterized the book as a beat novel, thinking that French critics knew better, perceiving it as the first "new wave" novel by presenting a nightmare as flat documentary. Others have called it an attempt at being an American existential novel a la Hemingway (click here for a review of the book). As with Kerouac, primary characters represent real-life people (for example, writers Anatole Broyard and William Gaddis).

I was engaged enough by the book, although I didn't really dig Brossard's writing style. The Greenwich Village descriptions put the reader right there, but the dialogue is a bit unrealistic (to me). Most importantly, I didn't really care about any of the characters, but I suspect that was Brossard's intention, paralleling the characters' attempts at being too cool for traditional love relationships.

Would I recommend it? Yes. It's a fun read, especially if you dig the Greenwich Village scene in the later 40s. I'm not running out and finding more Brossard to read, but I'm glad I read Who Walk in Darkness.