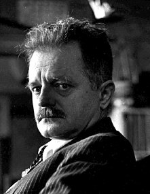 Poet and critic Kenneth Rexroth was born this date -- December 22 -- in 1905. We have opined about him several times here on The Daily Beat (e.g., click here).

Most notably for Jack Kerouac fans, Rexroth was portrayed as Rheinhold Cacoethes in The Dharma Bums, my favorite Kerouac novel. To wit, a couple of excerpts (Penguin Books, 1976):


We got to his little shack as it grew dark and you could smell woodsmoke and smoke of leaves in the air, and packed everything up neat and went down the street to meet Henry Morley who had the car. Henry Morley was a be­spectacled fellow of great learning but an eccentric himself, more eccentric and outré than Japhy on the campus, a librar­ian, with few friends, but a mountainclimber. His own little one-room cottage in a back lawn of Berkeley was filled with books and pictures of mountainclimbing and scattered all over with rucksacks, climbing boots, skis. I was amazed to hear him talk, he talked exactly like Rheinhold Cacoethes the critic, it turned out they'd been friends long ago and climbed mountains together and I couldn't tell whether Morley had influenced Cacoethes or the other way around. (p. 39)

"My Buddhism is nothing but a mild unhappy interest in some of the pictures they've drawn though I must say some­ times Cacoethes strikes a nutty note of Buddhism in his mountainclimbing poems though I'm not much interested in the belief part of it." (p. 46)

Posted by Rick Dale, author of The Beat Handbook at 7:29 AM