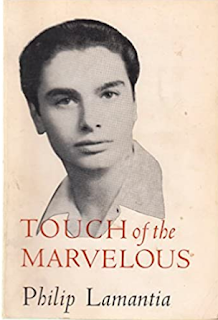 Poet Philip Lamantia died on this date -- March 7 -- in 2005. He appeared in two of Jack Kerouac's works: as Francis DaPavia in The Dharma Bums and as David D'Angeli in Desolation Angels. Lamantia read at the famous event at the Six Gallery in 1955 that many point to as kicking off the San Francisco poetry renaissance. (He didn't read his own work, but rather that of his dead friend, John Hoffman.)
In a May 10, 1952 letter to Allen Ginsberg, Jack Kerouac described visiting Lamantia:

In Frisco, the last week, I visited Lamantia with Neal, he is living in the former stone small castle overlooking Berkeley Calif. he was reading "The Book of the Dead," was reclined in a sumptuous couch with furnishings and turned us on, three friends from Calif. U. dropped in, a psychology major who is apparently his Burroughs, a tall handsome owner of the house (who is somewhat the Jack K.) lounging on floor and sleeping eventually [. . . .]  and a young eager intelligent kid who was like you; this was his circle, and of course he was being Lucien, they talked about psychology in terms of "I saw that damned black background to the pink again in yesterday's peotl," "Oh well (Burroughs), it won't hurt you for awhile" (both snickering). [. . . .] Lamantia showed me his poems about the Indian tribes on the San Luis Potosi plateau, I forget tribe name, they deal with his visions on Peotl and they, the lines are,
arranged
like
this, for effect, but more
complicated. (Jack Kerouac Selected Letters 1940-1956, 1995, Penguin Books, p. 349)

We celebrated Lamantia's birthday on October 23 HERE; there's a link there to some of his poetry. Reading some of it today would be a Beat thing to do.

Posted by Rick Dale, author of The Beat Handbook at 10:34 AM