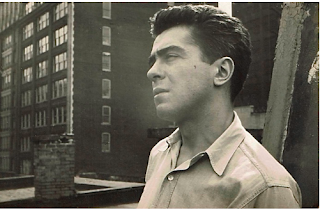 Cannastra was apparently a "wild man" figure* in the early Beat days, and he appeared in Jack Kerouac's works as follows: Finistra in Visions of Cody; Cannastra Finistra in Book of Dreams; and (probably) Charley Krasner in The Subterraneans. We have mused previously (click here) that without Cannastra in the Beat story, we may not have had the same Kerouac we love and we may not have had Jan Kerouac at all (Jack married Jan's mother, Joan Haverty, a few weeks after Cannastra's death and she had been the latter's girlfriend).

Of further import, Kerouac supposedly got the paper from Cannastra on which he (Jack) typed On The Road. You can read more about that and other things Cannastra by clicking here (it's a link to a piece by Brian Hassett).


*Cannastra's antics are well-documented in Gerald Nicosia's Memory Babe: A Critical Biography of Jack Kerouac. There you can read about Bill appearing at a party dressed as a palm tree wearing only a jockstrap and enormous headdress, or the time he and Jack ran around the block naked.

Posted by Rick Dale, author of The Beat Handbook at 3:47 PM