Curation #30 from my Kerouac bookshelf: Maggie Cassidy by Jack Kerouac 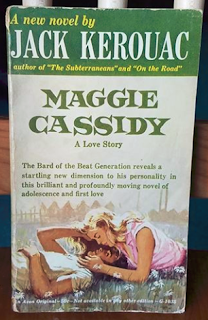 If you've been following along, you know that today's curation item is #30 in sequence and it's a copy of Jack Kerouac's Maggie Cassidy. This particular copy is a paperback by Avon and the copyright page is pretty empty: no printing number and the only copyright date is the original 1959. I'm skeptical that this paperback is from 1959, although it is pretty old based on the yellowed pages. It's in fair condition -- binding and pages intact and no markings on the text. The provenance is likely that I bought it used from Amazon (see link below to get your own copy). This book was written circa 1953 but not published until after the success of On The Road, published in 1957.

As with Jack's other novels, Maggie Cassidy is largely autobiographical. To be more precise, it is a roman à clef, meaning it is based on actual events and characters but the names have been changed. Jack is known for this, and he is likewise known for playing pretty fast and loose with facts and chronologies; thus, while his novels give great insight into his life, one must be careful not to assume that he is presenting actual facts at all times. That is, he frequently took artistic license for various reasons (e.g., real life wasn't interesting enough).

Maggie Cassidy is about Jack's real-life relationship in high school with Mary Carney (AKA Maggie Cassidy). One can learn a lot from this book about living and growing up in Jack's hometown of Lowell, MA around 1939. While it is in one sense a teenage romance, Kerouac is able -- via his amazing eye for detail and descriptive prose -- to make this a compelling read. As the back cover says:


Once again Jack Kerouac's gift for mirroring the sense and essence of an era, for catching the breathing moments of life, his uncanny ear for truth -- all is richly revealed in this unique and nostalgic novel of a boy's first experience in love . . . of his exhilarating and bewildered search for the unawakened man still hidden behind the trembling, curious eyes of childhood.

I know that is marketing hype, but it is pretty damn accurate in my view. This is essential Kerouac, right up there with his best novels Visions of Gerard and The Subterraneans. Speaking of which, the back page of this book is an ad for Kerouac's The Subterraneans -- available for 35 cents from Avon Book Sales.

Henry Miller is quoted on the back cover, saying:


When someone asks "Where does he (Kerouac) get that stuff?" say: "From you!" He lay awake all night listening with eyes and ears. A night of a thousand years. Heard it in the womb, heard it in the cradle, heard it in school, heard it on the floor of life's stock exchange where dreams are traded for gold.

Below is a picture of Shelf #1 of my Kerouac bookshelf showing the placement of this book (11th item from the left) on the day I started curating my collection. Next up: Maggie Cassidy by Jack Kerouac (the second of two copies in my collection).

*I just read Tropic of Cancer for the first time and it's easy to see Miller's influence on Jack's writing.
Posted by Rick Dale, author of The Beat Handbook at 10:00 AM