Curation #29 from my Kerouac bookshelf: Lonesome Traveler by Jack Kerouac 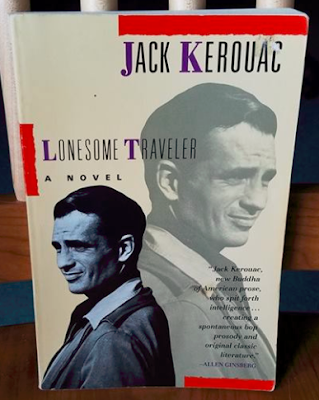 Item #29 in my Kerouac bookshelf curation project is this copy of Jack Kerouac's Lonesome Traveler. This book was first published by McGraw-Hill Book Company, Inc. in 1960. This particular copy is a 2nd printing by Grove Weidenfeld and I think its copyright date is 1989 (although the copyright page is -- as usual -- confusing to me). The book is in good condition. Its provenance is likely that I ordered it used from Amazon, which you can also do via the link below.

What can I say about Lonesome Traveler? It's great. It starts with an Author's Introduction (formatted somewhere between a resume and an interview) that includes the famous phrase, "Am known as 'madman bum and angel' with 'naked endless head' of 'prose.'" Then it's prime Kerouac presented in 8 short pieces (so it's misleading to call it, as on this cover, "A NOVEL"):


Some of this is familiar territory: the topics appear in other Kerouac novels (e.g., "Alone on a Mountaintop" is about Kerouac's time as a fire lookout on Desolation Peak in the Cascades for 2 months in the summer of 1956; this is the same territory Jack takes up in Desolation Angels and also The Dharma Bums).  Some of these pieces were published in magazines prior to 1960 such as Evergreen Review (where "The Railroad Earth" appeared as "October in the Railroad Earth" in  Volume 1 Issue No. 2 in 1957 -- click here for the whole issue). You can hear Jack read the first part of this story accompanied by Steve Allen on piano here.

This is quintessential Kerouac and it belongs in your collection. And remember Jack's concluding words: "The woods are full of wardens."


Below is a picture of Shelf #1 of my Kerouac bookshelf showing the placement of this book (10th item from the left) on the day I started curating my collection. Next up: Maggie Cassidy by Jack Kerouac (one of two copies in my collection).

adsf
Posted by Rick Dale, author of The Beat Handbook at 11:09 AM