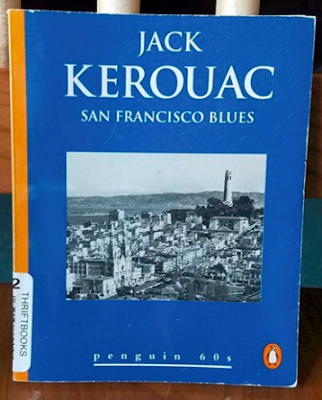 Item #33 in my Kerouac bookshelf curation project is this copy of Jack Kerouac's San Francisco Blues. This is a Penguin Books edition with a copyright date of 1995 and no printing number. I've seen it shown as published in 1991 at Empty Mirror. That makes sense since it appears as part of Kerouac's Book of Blues, published in 1995.

This copy is in good shape. The provenance of this particular copy is likely that I purchased it used from Amazon, which you can do via the link below. SF Blues is a small book of poetry, 4-1/4" x 5-1/4" and comprising 80 one-page -- or less, as the 1st and 2nd Chorus are on the same page -- poems ("choruses").

As Kerouac says in the prefatory matter:


San Francisco Blues was my first book of poems, written back in 1954 & hinting the approach of the final blues poetry form I developed for the Mexico City Blues.     In my system, the form of blues choruses is limited by the small page of the breastpocket notebook in which they are written, like the form of a set number of bars in a jazz blues chorus, and so sometimes the word-meaning can carry from one chorus into another, or not, just like the phrase-meaning can carry harmonically from one chorus to the other, or not, in jazz, so that, in these blues as in jazz, the form is determined by time, and by the musician's spontaneous phrasing & harmonizing with the beat of the time as it waves & waves on by in measured choruses.
It's all gotta be non stop ad libbing within each chorus, or the gig is shot.

According to a letter from Kerouac to Allen Ginsberg, San Francisco Blues was written in March 1954 when Jack "'left Neal's . . . and went to live in the Cameo Hotel on Third Street Frisco Skid Row'" (Book of Blues, p. 271). These poems have no titles other than 1st Chorus, 2nd Chorus, etc. They all focus on San Francisco, exemplifying Kerouac's spontaneous style and powers of description. Click here for an interesting take on the book by Cedar Sigo at Poetry Foundation in which he imagines Kerouac writing these poems while looking down on the San Francisco streets from his window.

Kerouac was an accomplished poet, although it sometimes seems he is more acknowledged for his prose novels. If you haven't checked out Kerouac's poetry, this is as good a place to start as any. Keep in mind that you can read it in its entirety in Book of Blues (coming up in a future curation) along with a lot of other poems.

Below is a picture of Shelf #1 of my Kerouac bookshelf showing the placement of this book (14th item from the left) on the day I started curating my collection. Next up: Desolation Angels by Jack Kerouac.

Posted by Rick Dale, author of The Beat Handbook at 9:51 AM