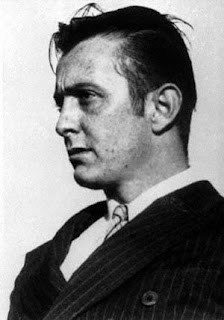 Apparently, Charles Bukowski wrote in the introduction to John Fante's Ask the Dust, "Fante was my god." And Fante is credited with influencing Kerouac, too, although I can't seem to triangulate that fact with anything I consider "scholarly."

I haven't read any Fante. I did try to watch the Colin Farrell-Salma Hayak film of Fante's novel, but it put me to sleep faster than a double shot of warm Bushmills.

Ask the Dust has no preview available on Google Book Search, and limited "Search Inside" options on Amazon. It starts:

One night I was sitting on the bed in my hotel room on Bunker Hill, down in the very middle of Los Angeles.

It goes on in a very Kerouacian style. Actually, I liked what I read. I may have to settle down and read the whole book.

So now you know, perhaps, of another influence on Kerouac. And Fante looks a little bit like Jack at first glance, don't you think?
Posted by Rick Dale, author of The Beat Handbook at 8:47 AM

Email ThisBlogThis!Share to TwitterShare to FacebookShare to Pinterest
Labels: Fante

I read Ask the Dust last summer. It was alright. It definitely follows the loosely autobiographical narrative of a young writer trying to make it in world, including all the strange encounters he has along the way, the women he meets up with, the drinking, and so on. The movie was pretty bad, especially the convoluted stuck on ending. Would have thought they could have done a lot better considering it was by the same writer/director who wrote Chinatown and The Last Detail. Can only hope Hollywood doesn't take such liberties if and when On the Road finally gets made.

Fante is great, although the style is a bit more regular that Kerouac's style. It's like a swing versus bebop! But it's all similarly passionate and sincere.

jonny and michael, thanks for your feedback!

For sure I hope Hollywood doesn't fuck up On The Road. Wait! What am I saying? Of course they will (sadly). Unless by some miracle Coppola retains control right through final editing.

You can't seem to "triangulate" and you haven't read any Fante. Why are you talking?