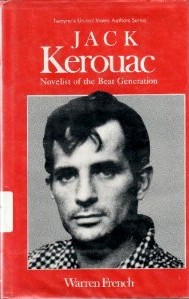 I was at the UMF campus library just now, looking for Minor Characters by Joyce Johnson. She actually visited campus a few years ago and there is an audio recording from her visit in the archives. Unfortunately, someone borrowed her book and never returned it. Perhaps someone will buy a replacement copy and donate it, and I know just who that person might be.

While browsing the Kerouac section (which, by the way, is fairly well-represented but not nearly complete), I ran across a Kerouac biography by Warren French, titled simply, Jack Kerouac. Interestingly, the picture I found on-line (above) shows a subtitle, Novelist of the Beat Generation. That subtitle does not appear in the 1986 edition I am looking at (yes, I borrowed it from the library because, after all, I only have about 50 books in a pile waiting to be read). This copy does indicate that it is part of Twayne's United States Authors Series, and is numbered TUSAS 507. This copy has been rebound, so I can only assume that it had the above cover at one time. If it did, I wonder if the subtitle appeared.

I'll post some thoughts about the book once I read it (it's due September 15, so I am under the gun).

For you eggheads, here is the citation from the copy I borrowed (in APA style):