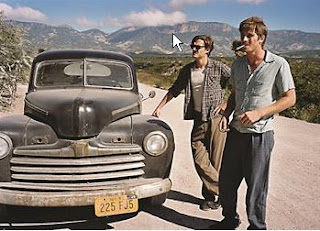 Walter Salles' film adaptation of On The Road - the U.S. version (different from Cannes) - opened at the Mill Valley Film Festival on Thursday night. It was attended by some legendary Beat Generation figures such as Gary Snyder, Lawrence Ferlinghetti, Diane di Prima, and Michael McClure. Also attending was Kerouac biographer Gerald Nicosia, so we hope to get some inside scoop on this version of the film (you will recall that Gerry gave us a review of the Cannes version as part of an interview back in May - click here).


Posted by Rick Dale, author of The Beat Handbook at 11:06 AM