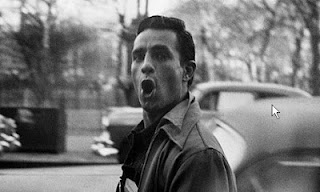 Each year when October 21 rolls around, those of us who consider ourselves Kerouacians take pause to remember that Jack Kerouac died on this date in 1969, 43 years ago at the age of 47. They're having a Walk and Wake in Jack's hometown of Lowell today, an event I'd like to attend but am choosing to be responsible today and attend to worldly matters.

I usually post a picture of his memorial or grave on this anniversary, but I chose to post one of my favorite pictures of Jack, looking alive and full of life. That's how I want to remember him, not as he was toward the end, a sad stereotype of the famous author gone alcoholically bad.

You might be thinking - or have thought in the past regarding my "obsession" with Kerouac - "What is the fascination?" Well, ask the people of Lowell, who celebrate his life every October (and March, his birth month) with a round of scholarly and social events. Ask John Wight, who came to Lowell last week for the events all the way from Washington with a backpack, no place to stay, and little money - a true hobo after Jack's heart. Ask any of the many people who make pilgrimages to Jack's grave or to the Lowell events from all over the world each year. Ask the editorial board of Modern Library, who named Kerouac's On the Road as one of the top 100 novels of all time (it's almost always on such "lists" regardless of the source). Ask the NY Times, which gave On the Road a rave review in 1957 (click here). Ask any of the 60,000+ people who buy a copy of On the Road each year, or the thousands who buy any of Jack's other works (too numerous to mention so click here). Ask any of the dozens of Kerouac scholars who spend their lives studying his life and work. Ask any of the dozens of Kerouac biographers. Ask any of the 2,423 members of the Jack Kerouac group on Facebook. Ask any of the hundreds of people who contributed tributes to Jack for the 2012 scroll via the OnTheRoad4Kerouac Project (which is presenting the scroll to The Beat Museum in San Francisco on Saturday night October 27 at 7 PM). Ask me (for example, read my post here).

Of course, the best way to figure out the fascination is to read Kerouac. And not just a once-through of On the Road (since it's far from his best work), but a deep delving into his many Lowell novels or road novels or his poetry.

The really cool thing here - this is very, very important to comprehend so read carefully and think this through - is that all of the above support for Kerouac is not typical 21st Century pop culture mindless hive mind like the kind that results in the video by the rapper from South Korea getting millions of hits on YouTube. There's something here, folks, something substantial and beautiful and passionate and lasting. It's art. It's humanity. It's genius.

Those of us who "get" Jack Kerouac would love nothing more than for the uninitiated to come into the fold, but, sadly, in today's sound byte culture, that is a tough sell. It takes substantial and close reading to "get" Jack Kerouac, and that takes not only the will to do the reading but the necessary time. Perhaps the release of Walter Salles' film version of On the Road will lead some folks to Kerouac, but I suspect it will have minimal impact.

Kerouac's work reminds me of Eckhart Tolle's story about the beggar who sits on a box by the side of the road for years and years until someone asks him what is in it. When pressed to actually open the box, the beggar is shocked and elated to find that it is full of gold. Too many people I've met think they know Kerouac, but they only know him second-hand; that is, they know what others say about him, and, as I mentioned before, since he is not a mass appeal pop culture icon, that second-hand knowledge is often skewed. They haven't actually spent serious time with his writing, and that is what's required if you want an answer to the question, "What's the fascination?" No one can explain it to you - you have to figure it out for yourself. The nice thing is, like the beggar's gold, Jack's writings are sitting right there patiently waiting to be read.

So, those are my thoughts on this 43rd anniversary of Jack Kerouac's death. If you want to read what I've written in the past on this topic, click here.

Here's to Jack Kerouac, who said in the 211th Chorus of Mexico City Blues:

Posted by Rick Dale, author of The Beat Handbook at 11:40 AM

I'm reading this post on Monday, October 22nd, and just remember that I had a dream last night about Jack. He was hanging out with us at our home in Belgrade Lakes. I don't remember a lot of details of the dream, just flashes here and there. Very dramatic, bordering on chaotic, as well as sensual and sexual.