Jack Kerouac followed me on vacation

We've been on hiatus here at The Daily Beat while traveling in Arizona and California, making a conscious effort to leave the everyday life behind and enjoy "vacation." Nevertheless, Jack Kerouac followed me on my travels as I ran into this in a Flagstaff used bookstore and, not owning it, had to fork over the $9.95 asking price. 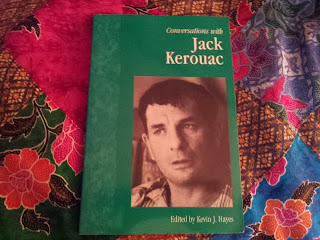 Conversations with Jack Kerouac was edited by Kevin J. Hayes and published in 2005 by University Press of Mississippi. Hayes was (is?) a professor of English at the University of Central Oklahoma, and in this book he pulls together such various pieces as Mike Wallace's 1958 interview with Jack, a 1958 San Francisco Examiner interview, Al Aronowitz's 1959 piece, "St. Jack (Annotated by Jack Kerouac)", Stan  Isaac's "Playing 'Baseball' with Jack Kerouac" from Newsday in 1961, the Ted Berrigan 1967 Paris Review interview, and several others (10 in all).

I haven't read it yet, and most if not all of these pieces will be familiar to the loyal Kerouacian. I don't think I've read either of the Newsday interviews by Val Duncan (1959 and 1964). In addition, it contains an interesting introduction by the editor which you won't find anywhere else. The Kerouac included Kerouac chronology is standard fare.


Posted by Rick Dale, author of The Beat Handbook at 11:01 AM

Dear Rick, I am not sure if I am posting this in the appropriate place. I came across something, I believe by you, that had to do with the possibility that Kerouac was murdered. I've thought something like that for many years, ever since reading Nicosia's biography of Kerouac in 1988, where he recounts the beating Kerouac took in Fla. at the hands of, I believe, some blacks. It's really kind of amazing that more wasn't made of this over the years but considering the leftist tyranny we've been ling under for so long, maybe not so amazing.

Rick,
All of those interviews and more from the Hayes book, Conversations, can be found in the 500 page book, Empty Phantoms, by Paul Maher,Jr.
I have been reading Kerouac since I discovered his books in 1970.
Steve Mehl
York, PA

brcanson, you are correct that I posted about Jack Kerouac being murdered on September 3, 2009 (http://thedailybeatblog.blogspot.com/2009/09/jack-kerouac-was-murdered.html).

Steve, I have Empty Phantoms but didn't make that connection - thanks.

Rick,
I am glad that I was able to post a reply because in the past I was unable to do so and could not communicate with you. I was thrilled to see the movie, "On the Road" is now out in DVD format for only $12.95. As a reader of Kerouac books for over the past 40 years I sincerely appreciate the work that you have done on this website to promote such a cultural experience as Jack Kerouac. I find it to be just that, an experience that one can dig!
Steve