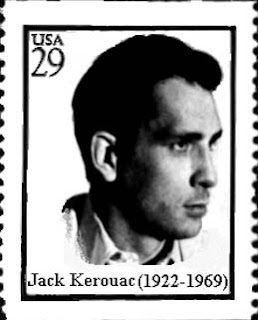 It's a shame that Jack Kerouac is not featured on a U.S. postage stamp despite efforts that have been underway since 1994. The most recent attempt is a letter from a couple of Massachusetts state legislator and Lowell residents to the Citizens' Stamp Advisory Committee sent on June 10. If you want to contact the committee to lend your support, they can be reached by snail mail at:

Click here for an article from the Lowell Sun about past efforts.

Below is the text of my letter (being sent today):

It is my understanding that you are in receipt of a recent letter signed by Massachusetts state legislators and residents of Lowell, Massachusetts requesting that American author Jack Kerouac become the subject of a U.S. postage stamp. I write in full support of their effort.

From my review of the stamp subject criteria, it appears that Jack Kerouac meets all of them. In particular, he is without a doubt a person of “widespread national appeal and significance.” Today, 44 years after his death, his numerous books sell hundreds of thousands of copies annually. His seminal novel, On the Road, is routinely included on “Top 100” lists published by reputable organizations such as the New York Times. The novel was the subject of a recent movie featuring a number of Hollywood stars such as Kristin Stewart, Garrett Hedlund, Viggo Mortenson, and Steve Buscemi.

Each year, hundreds of people from all over the country (and the world) make a pilgrimage to Mr. Kerouac’s hometown of Lowell, Massachusetts to honor his memory by visiting his gravesite and other landmarks such as the home in which he was born and the schools he attended.  There is a strong Kerouac presence in Lowell’s National Historical Park exhibits, and Lowell established the Jack Kerouac Commemorative Park in 1988. Other parts of the country also capitalize on Mr. Kerouac’s appeal and significance. For example, in January 2013 the San Francisco Public Library held a panel discussion about Mr. Kerouac featuring celebrities such as Peter Coyote, the noted actor. Naropa University in Boulder, Colorado is the home of the Jack Kerouac School of Disembodied Poetics, founded in 1974, and there is an on-going writer-in-residence program housed in one of Mr. Kerouac’s former residences in Orlando, FL (called The Kerouac Project).

If you walk into any bookstore in the United States, you will find Mr. Kerouac’s novels for sale. Signed first editions of his novels sell for thousands of dollars. A Google search on any particular day will yield new articles, blog posts, etc., about Mr. Kerouac. Finally, Mr. Kerouac has a strong social media presence. The Jack Kerouac Facebook group boasts almost 2,500 members from around the world and Mr. Kerouac is mentioned on Twitter many times a day.

In summary, Jack Kerouac meets the stamp subject criteria and would be a welcome addition to the roster of famous Americans on U.S. postage stamps. I hope you will look favorably on this request and I look forward to hearing about your decision. Thank you in advance for your consideration.

Dr. Richard Dale
Posted by Rick Dale, author of The Beat Handbook at 11:09 AM