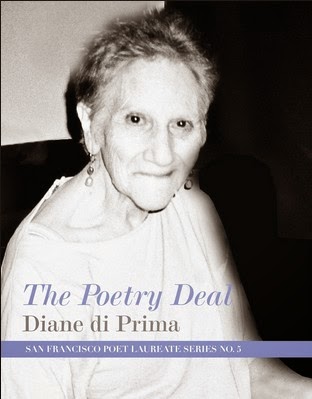 As the back cover states, "The Poetry Deal is the first volume of new poetry in decades from legendary Beat poet, Diane di Prima." I've had this book on the shelf for review for a few months, and picked it up last night after reading her Memoirs of a Beatnik cover-to-cover in one sitting. After that pornographic - and I mean that in the best possible way - read, I was compelled to read her latest poetry. I wasn't disappointed.

The Poetry Deal is 56 poems sandwiched between two prose statements, the first an homage to her adopted city of San Francisco and the last a tribute to poetry. The latter was unnecessary as di Prima's poems themselves are tributes. Tributes to the lost, tributes to San Francisco, tributes to City Lights, tributes to environmental consciousness. She is in fine form here and especially with pieces like "Haiti, Chile, Tibet," in which she puts forth eight beautiful suggestions for changing the social contract and saving this "rather small rock" populated by a "handful of tribes."


can you call it looting when anyone breaks plate glass
comes out with radios       medicine
camping supplies              whatever is needed
is that looting or just plain sanity?               keeping a family, keeping each other, alive

In this social media world, she longs for real connection in "Where Are You?"


stay in touch means you touch each other, lovers or
not

Some of her poems are untitled and short and light:

Others, like "Zoron, Your Death," span several pages and take up heart-wrenching subjects like a friend dying of AIDS:


next morning I got the call:
you had died
before Yeshe got there


you had somehow taken refuge
in all of Space


You owe it to yourself to get a copy of The Poetry Deal from City Lights. This is the kind of poetry book that one comes back to over time, gleaning new insights and making fresh connections. The poems are real, they are significant, and they are well-crafted: as one would expect from the Poet Laureate of San Francisco.

P.S. I also recommend Memoirs of a Beatnik. Readers of this blog looking for a Kerouac fix won't be disappointed as di Prima spends most of one chapter recounting, in graphic detail, a group sexual encounter with Jack and Allen Ginsberg and two of her New York friends. Critics will point out that this was a piece of erotica she wrote for money, and thus the sexual escapades are likely exaggerated. Thus, one could get a superficial impression of the Beats from Memoirs, but at the same time it does give one an insider's view of what it was like in the 1950s/60s for a woman to live in a way that women weren't supposed to live. I found it engaging and well-written. Poetic, in fact. And di Prima knows how to write about sex - that is for sure. 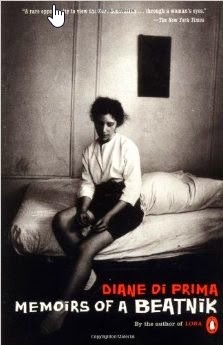 Posted by Rick Dale, author of The Beat Handbook at 9:59 AM

Well done review Rick, the collection sounds intriguing.
Memoirs was a cool read, and yes, sometimes poetic... quite a size queen she was! Who'd a thunk it?
Richard Marsh