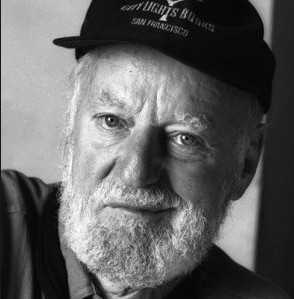 Poet and publisher Lawrence Ferlinghetti turns 97 today. Co-founder of San Francisco's City Lights Books in 1953 with Peter D. Martin, Ferlinghetti was instrumental in getting Beat literature into print, not the least of which was Allen Ginsberg's Howl, over which a famous obscenity trial was held in 1957 (and the good guys won!). Click here for the website of City Lights Booksellers & Publishers.

Perhaps most notably for Kerouac fans, Ferlinghetti was Jack's publisher and friend. It was Ferlinghetti's cabin in Bixby Canyon that Jack retreated to in 1960, an experience about which he wrote his desperate 1962 novel, Big Sur, about the dark night of the soul he experienced there.

Jerry Cimino, founder of The Beat Museum (on Broadway, literally within view of City Lights Bookstore on Columbus Avenue), wrote a great piece today in honor of Ferlinghetti's birthday. It contains some essential biographical information as well as links where you can read and listen to Ferlinghetti read his poem, "Sometime During Eternity..." (click here). (A poem -- and this is very tangential -- that reminds me of what my poet friend Charlie James told me was the Beatnik trinity: Daddy-o, Laddy-o, and Spook.)

If you're ever in San Francisco, you absolutely have to visit City Lights Bookstore. While you're at it, make it a three-for-one and visit Vesuvios's across Jack Kerouac Alley and The Beat Museum across Columbus and Broadway. It's a required Beat pilgrimage.

Happy Birthday, Mr. Ferlinghetti. May you live to be a hundred and a hundred more!


Posted by Rick Dale, author of The Beat Handbook at 3:47 PM