In his preface to Big Sur, Kerouac writes:

My work comprises one vast book like Proust's except that my remembrances are written on the run instead of afterwards in a sick bed. Because of the objections of my early publishers I was not allowed to use the same personae names in each work. On the Road, The Subterraneans, The Dharma Bums, Doctor Sax, Maggie Cassidy, Tristessa, Desolation Angels. Visions of Cody and the others including this book Big Sur are just chapters in the whole work which I call The Duluoz Legend. In my old age I intend to collect all my work and re-insert my pantheon of uniform names, leave the long shelf full of books there, and die happy. The whole thing forms one enormous comedy, seen through the eyes of poor Ti Jean (me), otherwise known as Jack Duluoz, the world of raging action and folly and also of gentel sweeness seen through the keyhole of his eye.


On February 1, 2018 in the Forest Lake Times, Brad O'Neil wrote a piece in which he recommends reading the books in The Duluoz Legend in order (click here for article). I agree with the recommendation, but I have a question about his list. He includes the following 13 books (in order):

There are arguments that all of these books can be seen as part of The Duluoz Legend, and they are in the correct chronological order for the narrative of Jack's life.

I wonder, however, if there is not a book missing from O'Neil's list:  The Town and the City. This is included in the list appearing at DHARMA beat (click here), with Lonesome Traveler omitted (there is a note that it is sometimes included along with Book of Dreams, but neither is a novel). You'll note that they also include Atop an Underwood, which is not a novel).

I don't want to open up a can of worms here, but am simply pointing out that there is not 100% agreement on which Kerouac books comprise The Duluoz Legend. David Barnett in The Guardian (click here) identifies 13 books, basically the same list as O'Neil, arguing that it makes sense to only go with novels (which Atop and Underwood and Book of Dreams are not).

I can go with that argument, in which case one could argue that The Town and the City should make the list but not Atop an Underwood and Book of Dreams). Such a list would look like this:

Dave Moore, Kerouac scholar extraordinaire, posted the below list of 12 books in the Jack Kerouac Facebook group as a reaction to the O'Neil piece. His list comports with O'Neil's except he omits Lonesome Traveler. 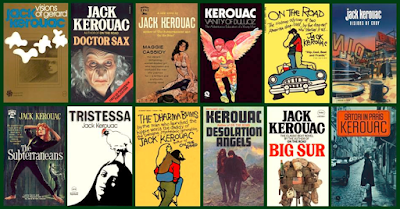 What is the definitive list of Kerouac books in The Duluoz Legend? Who knows? Jack's dead and he's not going to weigh in short of conducting a seance. It's a matter of opinion, and everybody's got one. It depends on the parameters one sets. Novels only gets you one kind of list. Going beyond novels gets you another. Etc.

Personally, I think we are close enough to agreement to say that we know which books are definitely on the list (Dave Moore's 12-item list, e.g.). Going with the "novels only list," Dave's list only omits The Town and the City.

I own and have read all the books mentioned -- most more than once -- and now I have a bucket list goal to read each book in The Duluoz Legend back-go-back and in order. I just have to decide which list to use. I'm leaning toward Dave's, given that Kerouac himself doesn't list The Town and the City in his 1960 notebook. But he does list Railroad Earth (whatever that is) and Book of Dreams and Lonesome Traveler, so confusion remains. Maybe using Jack's list is the way to go. 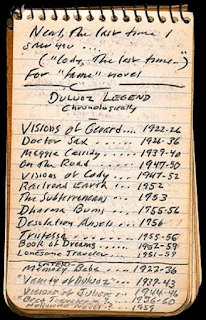 What are your thoughts on the matter? I'd like to know.

By the way, I think it's pronounced dew'-lou-oz (3 syllables).
P.S. I blogged about the origin of the name, Duluoz, in a subsequent blog post HERE.

Posted by Rick Dale, author of The Beat Handbook at 12:14 PM

Dave Moore notes that his list is Duluoz novels only, and he left out The Town and the City because Kerouac didn't include it in his own list. Dave thinks The Duluoz Legend is much more expansive, and includes many items none of the lists we discussed. Dave's more expansive list can be seen here: http://www.beatbookcovers.com/kercomp/works.htm.